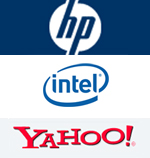 The mystery announcement we mentioned yesterday was just released – Yahoo, Hewlett Packard and Intel are jointly announcing a new cloud computing research initiative called the Cloud Computing Test Bed. Users will be able to build and launch new applications on the platform.

It’s being described as “a globally distributed, Internet-scale testing environment designed to encourage research on the software, data center management and hardware issues associated with cloud computing at a larger scale than ever before.” Other partners include the Infocomm Development Authority of Singapore (IDA) (which is distinct from the MDA, I believe, which is unfortunate), the University of Illinois at Urbana-Champaign, and the Karlsruhe Institute of Technology (KIT) in Germany:

The test bed will initially consist of six “centers of excellence” at IDA facilities, the University of Illinois at Urbana-Champaign, the Steinbuch Centre for Computing of the Karlsruhe Institute of Technology, HP Labs, Intel Research and Yahoo!. Each location will host a cloud computing infrastructure, largely based on HP hardware and Intel processors, and will have 1,000 to 4,000 processor cores capable of supporting the data-intensive research associated with cloud computing. The test bed locations are expected to be fully operational and made accessible to researchers worldwide through a selection process later this year.

“The HP, Intel and Yahoo! Cloud Computing Test Bed furthers our commitment to the global, collaborative research community that is advancing the new sciences of the Internet,” said Prabhakar Raghavan, head of Yahoo! Research. “With this test bed, not only can researchers test applications at Internet scale, they will also have access to the underlying computing systems to advance understanding of how systems software and hardware function in a cloud environment.”

Researchers at HP Labs, the central research arm of HP, will use the test bed to conduct advanced research in the areas of intelligent infrastructure and dynamic cloud services. HP Labs recently sharpened its focus to help HP and its customers capitalize on the industry’s shift toward cloud computing, a driving force behind HP’s vision of Everything as a Service. With Everything as a Service, devices and services will interact seamlessly through the cloud, and businesses and individuals will use services that anticipate their needs based on location, preferences, calendar and communities.

More on Yahoo, HP and Intel’s websites. This gets Yahoo in the game that Microsoft, Amazon and Google have been playing for some time.