The medical industry is one that thrives on innovation and evolution. New procedures, medicines, diseases, and theories are released practically every day. In such an environment, the need for a website to reflect and allow for documentation is apparent.

MedPedia is a new project, currently in development, that will offer an online collaborative medical encyclopedia for use by the general public. In order to keep the content accurate and up-to-date, content editors and creators have to have an MD or a PhD. Several highly-esteemed medical colleges will be contributing content to MedPedia, including Harvard Medical School, Stanford School of Medicine, UC Berkeley School of Public Health, and University of Michigan Medical School. Medpedia is also receiving support from the National Institutes of Health (NIH), the Centers for Disease Control (CDC), the Federal Drug Administration (FDA) and many other government research groups. The content from these organizations will then be edited by MedPedia’s community of medical professionals.

MedPedia is currently in closed beta with a live preview site, where contributors can apply to be included, and users can submit feedback and suggestions. They plan on opening up their beta in late 2008. 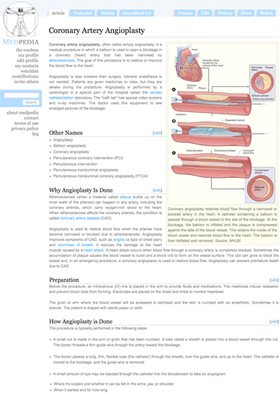 The site will feature content about diseases, anatomy, procedures, medications and medical facilities in two ways. The topic front page will be written in easy-to-understand language for the general public, but there will also be a more technical page where medical professionals can discuss more in-depth with a clinical tone. With more than 30,000 known diseases and conditions, more than 10,000 drugs prescribed each year, thousands of medical procedures being performed and millions of medical facilities around the world, they have their work cut out for them.

There is obvious competition with established medical resource sites like WebMD and MayoClinic. Those sites have done really well, but there’s always room for disruptive technology like this. Look at what Wikipedia did to Britannica, a 250-year old encyclopedia publisher. The advantage MedPedia has is its large range of medical professionals who create content based on their specialties, rather than having several in-house doctors creating content on a range of topics they aren’t formally familiar with.

This system is advantageous both to MedPedia and the medical professionals. MedPedia benefits from their knowledge and experience, and the doctors are able to promote themselves in their specific field of expertise. MedPedia contributors will also be able to form committees and boards in specific areas like “Childhood Obesity” and “Skin Cancer.” Each professional that specializes in that field will be able to join the committee (five of whom will make up the board) and will oversee the content generated and edited in that field.

MedPedia was founded by James Currier, a seasoned Silicon Valley entrepreneur. Currier founded Tickle, a quiz and personal test site in 1999, which sold to Monster in 2004 for about $94 million (though it recently lost a hefty portion of its staff and was said to be shutting down). After taking some time off to spend with his family, he started an incubator called Ooga Labs. He is also known for singing in the Here Comes Another Bubble video, from the group The Richter Scales. Currier is one of three co-founders for the group, which was surrounded by some controversy (they also performed the song live at The Crunchies). He got the idea for MedPedia when he found himself constantly searching for medical information online, like if his three-year old son needed to go to the emergency room for a fever.

The Advisory Board includes Gilbert S. Omenn, M.D., Ph.D., Professor University of Michigan Medical School; Linda Hawes Clever, M.D., M.A.C.P., Clinical Professor University of California San Francisco (UCSF) Medical School; Joseph B. Martin, M.D., Ph.D., former Dean of the Faculty of Medicine at Harvard University; and Mitch Kapor, philanthropist and founder of Lotus Development Corporation, designer of Lotus 1-2-3, Chair of Board of Directors for Linden Lab (creator of Second Life), Chair of Mozilla Corporation, and a member of the Advisory Board for the Wikimedia Foundation.