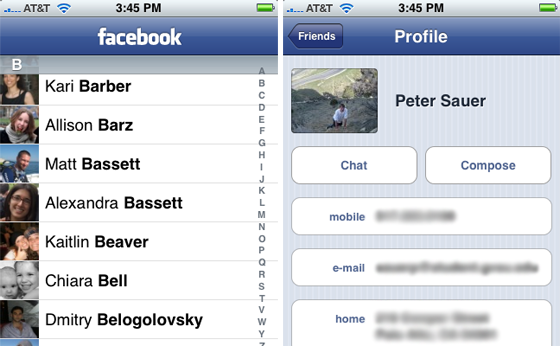 All of us iPhone fanatics are just getting our hands on the new apps, but I’ve already found one that I’m sure to consider indispensable within the next few months: Facebook’s new app.

Why is it so compelling? Because it almost eliminates the need to maintain a separate contacts list on my phone. While Facebook’s web app for the iPhone was cool enough, the native app basically transforms Facebook into a mobile directory with rich information about your friends.

If you’re even semi-serious about using Facebook to keep track of your friends, you may never have to click the “Phone” icon to dial them up. Just hit the Facebook icon and move over to the “Friends” tab. You’ll see all of your Facebook friends laid out, and when you click on their names, their contact info appears in the iPhone’s customary user interface.

Tap a friend’s phone number to call them (or hit their email address to write). The only time this method falls through is when a friend has decided not to enter the requisite contact info into their profile (something unnecessarily cautious, in my opinion, if you’ve set up your privacy settings correctly). 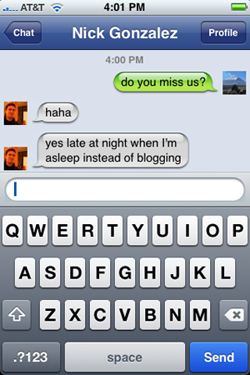 This application has the potential to eliminate the need for two other native iPhone features as well: SMS and Email. The app comes with Facebook Chat baked right in so you can send instant messages to friends who are currently online (either at their computers or on their phones). As soon as Facebook figures out a way to keep you “online” and available for chat even when the app is closed – and hooks Chat to the new push notification service so you’re aware of messages as they come in – I’ll be one step closer to saving that extra $10 per month I pay AT&T to let me send ludicrously overpriced text messages. Facebook should be working on a Chat-to-SMS (or Message-to-SMS) conversion feature that can be used to message with my friends who don’t own iPhones, or any other email-equipped smartphone.

As for email, Facebook’s messaging system is also built right into the app making it unnecessary to send lengthy messages through email (who wants to keep track of friends’ email addresses anyway when you can look them up by name?).

Joe Hewitt has also suggested on Facebook’s blog that the application will also become location-aware within the next few months:

The first version of Facebook for iPhone is just a glimpse of the future. For instance, the iPhone has the ability to find where you are located, and we are looking for ways to let you opt-in to share your location and discover nearby friends. We’re developing this and several other exciting new features that we’ll release in the coming months.

Looks like Loopt and all of the other location-based social networks are going to get a run for their money by the biggest player in town.

I have no fear that Facebook will thrive in the iPhone 2.0 world given this strong start. It’ll just need to find a way to get its developers involved since the platform is noticeably absent from the first version of this app.

Learn how to install the new iPhone software (which works on both the old and new models) here. Cross your fingers that you won’t lose any data during the update (I had no problems, however). Also check out the new MySpace iPhone app which, while quite functional, doesn’t replace the contacts list or provide chat.

Update: If you want to take a screenshot of an iPhone app, follow the instructions here.

Update 2: It looks like Facebook’s iPhone app doesn’t know how to properly render messages with quotations in them. Hopefully such obvious bugs will be worked out over the next few days.