Last February we hinted at South San Francisco startup Rocketon’s plan to release a virtual world that spanned the web. At the time, it appeared as though the company was pursuing an embeddable widget strategy. But instead of integrating virtual worlds into webpages, it has actually placed one on top of them so that avatars can roam the web just as you currently surf it.

Comparisons can be drawn to both Weblin and PMOG. Whereas Weblin places a little avatar on the bottom of your browser that can be used to chat with other visitors to a webpage, PMOG turns web surfing into a game with mine laying and loot plundering. 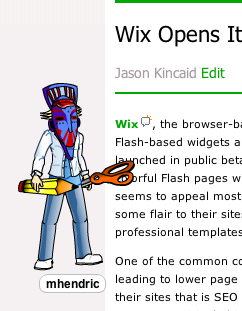 RocketOn was co-founded by two veterans from the gaming industry – Eric Hayashi and Steve Hoffman – so it comes as no surprise that its avatars participate in games with each other (as they do on virtual world sites like Club Penguin). However, like most other virtual worlds, Rocketon is also about chatting with friends and strangers, and dressing up your avatar in fun guises. The basic service is free but users can buy special virtual goods with real money or points that they’ve earned by performing certain tasks (or simply spending time using RocketOn).

How does one layer a virtual world onto the web? RocketOn has achieved this in two ways: first with a browser plugin, and second with a Flash browser emulator. Newcomers are expected to try out the virtual world by loading up a Flash app that can be used to browse the web with RocketOn superimposed. More committed users can download and install the plugin so that they can navigate the web as they normally would.

In addition to earning revenue from the sale of virtual goods, RocketOn is working to sign sponsorship deals with brands on the web. Say you visit insecticide company Black Flag’s website. Were Black Flag to sponsor RocketOn, it could build out its own interactive objects (like a roach motel) and entice avatars to participate in its own branded games (like killing as many roaches as possible with a spray can). Likewise, Gap could roll out a virtual clothing store ontop of its website where avatars buy its clothes and wear them wherever they go on the net.

RocketOn will remain in private beta for at least a few weeks longer, but we have 500 invitations to give our readers now. Get your account here while they last.