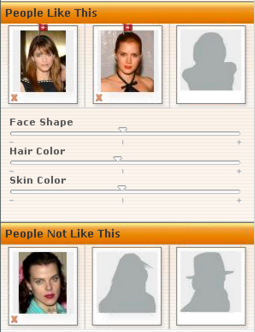 Eyealike, a video and image recognition company, has released an update to its ‘Eyealike Faces’ product that makes it easier for users to find their ideal match on dating sites. Eyealike Faces uses image matching technology to compare faces across databases consisting of millions of photos – the idea being that you can upload a photo of your ideal mate and get a listing of the best matches. Unfortunately, you won’t be able to try out a demo on your own – Eyealike only licenses the technology to third parties (a deal with a major dating site is in the works, so you won’t have to wait long).

The concept may be a little strange to some (the word superficial comes to mind), but physical attraction is obviously an important component for many people looking for a date. The new release of Eyealike includes “Face Levers”, which let users modify certain traits in the pictures they’ve uploaded. Looking for a woman with Angelina Jolie’s eyes but a slightly softer jaw? Just tweak the levers and bit and meet your future soulmate.

At least that’s what supposed to happen. The demo I saw wasn’t too impressive, but this was likely a result of a limited photo database of only a few thousand instead of the millions of images the technology is designed for. We’ll have to wait until the technology is incorporated into a major dating site to see if it is as effective as it promises.

Another technology company that offers similar image matching is Picitup, which didn’t work particularly well when we last reviewed it.