It’s a Wii without the $250 console. It’s virtual Pong and so much more. Any object is now an input device, even your fingers. Bang, bang! But there’s no better way to introduce you to CamSpace than by letting you watch the demo video below:

CamTrax’s core technology is a pure software solution that allows nearly any ordinary PC webcam (95% are supported) to track up to four objects—even as small as 5mm—in real-time and with very high accuracy and reliability. (It works only on Windows). Locking and tracking (X, Y, and Z axes and angle) are all automatic. Yaron Tanne, founder & CEO of CamTrax Technologies, the company behind CamSpace, has been developing the technology practically single-handedly for three years in his apartment in Tel-Aviv.

Tanne claims that most of the algorithms used are in the public domain but have been enhanced. There are also completely new algorithms developed from scratch. 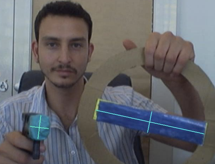 CamSpace requires an agent application to run locally in order to emulate a mouse, a keyboard, joystick, or other input device. Users can then program the emulation based on the game they want to control and the object(s) they want to control the game with. For example, one user could program a steering wheel for a racing game, where moving the wheel on the Z axis shifts the gears up and down. A different user can use two objects for the same game, programming the second object, say a coke bottle, to shift the gears.

Once a good portion of most popular games are emulated, the company will provide a portal where these emulations will be rated based on popularity and then offered for download.

Assuming there are no patent infringement issues, CamTrax could be a hit in several sectors, the most obvious one being gaming. While certainly the big game studios could take advantage of the technology, I can see a wider and quicker adoption among casual gaming entities such as Zynga and SGN. Cam-Trax could also find success in providing solutions for handicap individuals that cannot use standard input devices. Another application would be to emulate multi-touch control over media-centers. Some more ideas:

These are just the tip of the iceberg… Remember, all you need is a standard webcam—that’s a VERY low barrier to entry these days.

I’ve had the chance to play with CamTrax’s technology on several occasions and it works like a charm. This is true even in low and changing light conditions—based on first-hand experience. It really is hard not to be impressed with the technology, especially seeing as it still has Alpha status.

The four-man team recently raised $200,000 in seed financing from angel investors and plans on raising a Series A round in the coming months.

In the meantime, the company is working on a developer platform which will allow the integration of CamTrax technology into casual games and mini-applications. Expect a follow-up post when this happens in the coming weeks.