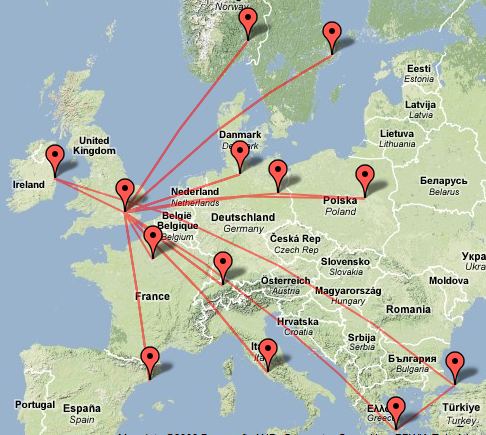 TechCrunch UK is taking the TechCrunch brand on a little road-trip (OK, plane trip) around Europe this summer and afterwards, making face-to-face contact with Europe’s best and brightest startups. We just held a great meetup in Barcelona for instance. Where possible I’ll be holding a TechCrunch meetup in the cities I visit (keep track via Dopplr), usually with a local partner. So here’s where I’ll be going next:

Paris
Seedcamp Paris
June 6th
Come and say hi as I’ll be at this influential competition for French startups.

Rome
June 20th
TechGarage
Come and say hi, as I’ll be at this cool new event for startups and VCs in Rome.

Dublin
Techcrunch / TechLudd Mashup
June 26th
A TechCrunch meetup held in conjunction with TechLudd (the Irish startup networking event). Watch TechCrunch UK & Ireland for details of the event, to be announced soon. Save the date!

Zürich
July 17th
TechCrunch Meetup Co-organised with Zurich’s Wuala and Doodle, and supported by Geneva’s Newscred. Yes, we want to mash-up startups from both those cities! Please get in touch about sponsorship.

Amsterdam
July 22nd
Amsterdam TechCrunch meetup co-organised with ebuddy. Please get in touch about sponsorship. Get a ticket here.

Other TechCrunch Events in Europe:

And TechCrunch UK has started organising other events, including a recent London Meetup TechCrunch Dinners (our first was with Scott Rafer here). We are looking for other notable speakers for panels and events, so please get in contact if you are going to be in London at some point and we’ll schedule you in.

We are also planning a major TechCrunch event in London, to be announced shortly. And we want to do other meetups around Europe (and I mean all of Europe, including Eastern Europe), so please get in touch about sponsoring and co-organising those with us. We’re currently missing a few countries as you can see. Thanks!