If you are having trouble paying for college, maybe you can hit up your social network for a loan. That’s the idea behind GreenNote, another peer-to-peer lending startup that is launching this week. (The site is still going through load testing, but should be up fully by Wednesday). Prosper, Zopa, and Lending Club (which is under regulatory scrutiny) already offer general P2P loans, but GreenNote is more like Fynanz or China’s QiFang, in that it is focussed only on student loans.

These tend to have lower default rates and there is a rising need for them. The funding gap between the average four-year cost of going to a state college and available federal loans is at least $22,000, according to the company. For private universities, that gap can be more than $100,000. P2P lending startups like GreenNote see that gap as a huge opportunity. In aggregate, there was a $113 billion funding gap in 2007, $95 billion of which was paid for by personal and family funds.

But GreenNote is not about matching high-risk borrowers with lenders who want a higher return. It is about tapping into the altruism of family and friends who want to chip in to help finance the college education of a student they already know. CEO Akash Agarwal says:

The loans are designed to mimic a federal Stafford loan—the interest rate at launch is 6.8 percent. The rate is fixed, payments are deferred for up to five years, and then students have 10 years to pay back the loan. No co-signers are needed, and GreenNote loans are open to non-U.S. citizens.

Lenders can pitch in as little as $100. In that sense, it takes more of a micro-finance approach. GreenNote keeps track of who owes what to whom, takes care of the paperwork, collects the funds, and then distributes the payments after the student graduates and starts paying back the loan. GreenNote takes a 2 percent fee up front from the student out of the principle of the loan, and another 1 percent from the lenders out of the interest. (Fynanz, in contrast, only takes a 1 percent fee).

GreenNote raised $4.2 million in a series A round last October from Menlo Ventures and Glenbrook Partners. 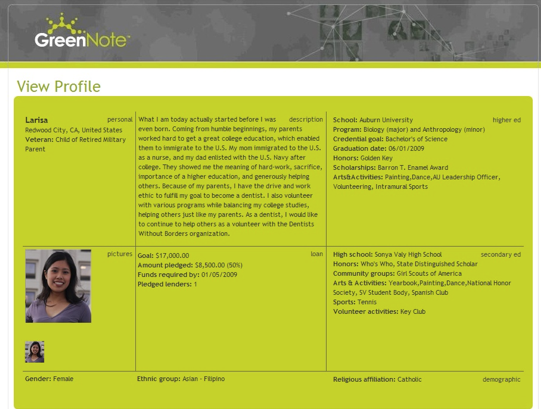