When we last wrote about FlipTrack in March 2007, it had created a niche for itself by making slideshows that were synced to background music. Since then, the company has reinvented itself: It is now Moblyng, a site dedicated to bringing the embedded flash widgets on social networks to mobile devices. Today, the company has launched a beta of its product, and has announced the closure of a $5.7 million funding round.

Moblyng’s main function is to take the Flash slideshow widgets seen on MySpace and other social networks, and convert them into a format that is viewable on most mobile phones. The system scrapes profiles for autoplaying flash movies and strips away layers in the .swf (Flash) file to expose the individual photos. These photos are formatted for display on any compatible mobile device, or, for phones that support video, they can be reassembled into mobile-friendly movies, along with the music and effects that were in the original flash widget. The newly-formatted files can be sent between users using SMS or through Moblyng’s built-in send function. 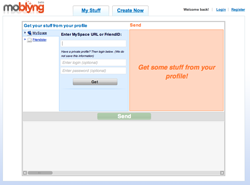 The new technology seems to work well, and at this point it seems like it has a large number of potential users – many phones don’t support Flash yet. That said, the phones that are capable of video playback are also more likely to feature Flash support in the near future (like the iPhone, for example), so Moblyng could see this userbase shrink quickly.

Moblyng’s $5.7 million funding round was led by Mohr Davidow Ventures and Deep Fork Capital. The company launched as FlipTrack in 2006, and is based in Menlo Park.