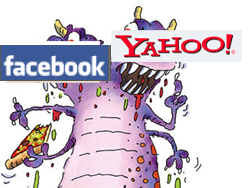 As Microsoft toys with Yahoo over the possibility of a resumed deal to buy only its search business, is it also thinking of throwing Facebook into the mix? That’s the latest rumor making the rounds. Asked about it in Japan, Facebook CEO Mark Zuckerberg danced around the question by stressing his desire for Facebook to remain independent, but declined to comment specifically on whether a sale to Microsoft was in the works. Presumably, though, he wouldn’t be in Japan if any deal was imminent. The only thing that is safe to assume right now is that Microsoft’s corp. dev. guys are talking to everybody else’s corp. dev. guys about any number of combinations or partnerships.

This is not the first time a rumor has surfaced that Microsoft wants to buy Facebook. After Microsoft walked away from Yahoo the first time, there was chatter that Facebook might be an alternative. What is different about this rumor is that it contemplates a combination of Yahoo’s search business with Facebook. Robert Scoble lays out his conspiracy theory about how such a combo would spell the end of the open Web. Scoble points out that stuff on Facebook is not very searchable, but if Microsoft owned both Yahoo’s search engine and Facebook, it could expose all of that social data to Yahoo’s search engine (while keeping it hidden from Google’s). That would give Yahoo’s search engine a leg up on social relevancy and people search, and thus give it a competitive advantage over Google in that area.

There are a few problems with this theory.

1. If opening up Facebook to search really does confer some sort of competitive advantage, there is nothing stopping Microsoft from negotiating a much cheaper technology deal with Facebook to allow its search engine to spider the social network. It doesn’t need to buy Facebook for $15 billion to $20 billion to do that.

2. It doesn’t need to buy Yahoo’ search engine to do that either. Microsoft has its own search engine. If combining search and Facebook really is a game-changer, it would be a (much-needed) game-changer for Microsoft search as well.

3. Making Facebook more searchable in and of itself is not a game-changer. Social data exists in many other places as well (MySpace, Bebo, Orkut, Hi5, Twitter, FreindFeed, Plaxo, del.icio.us, StumbleUpon, etc.). If indexing this social data will make search more relevant, it needs to be done across the Web, not just on Facebook. No one deal will solve this search issue.

4. Combining Yahoo’s search engine with Facebook does not solve Facebook’s biggest problem: making money from (mostly display) ads on Facebook. Microsoft is not doing such a great job selling display ads on Facebook already, and the new deal being talked about between it and Yahoo would not include Yahoo’s display advertising business. Arguably, putting together Facebook with Yahoo’s display advertising business would make a stronger combination (assuming that Yahoo has a better shot at figuring out how to monetize social-network ad inventory than Microsoft).

Still, what this discussion highlights is that buying Yahoo’s search business on its own might not do it for Microsoft without combining it with some other move. Microsoft needs to close a deal (any deal) with Yahoo first, though, before it can start moving around other chess pieces. As far as Facebook goes, keep an eye on Zuckerberg. If negotiations with Microsoft get serious, he’ll fly home in a hurry.