Today Plazes CEO Felix Petersen gave us a peek at iPlazer, the upcoming iPhone client for the geo-tagging social networking site. The app will be available when Apple’s official App Store launches in mid June. Plazes has been around for a while – it was one of the first companies to be covered on TechCrunch. Since then it has switched gears a couple of times, but it’s best described as Twitter with geotagging, points of interest, and social networking features.

Right now iPlazer seems like a combination of Twitter and Dopplr. The phone detects the user’s location through the iPhone API, then presents the user with a number of suggested descriptions (for example, opening Plazes from our office presented us with choices of “TechCrunch HQ” and “The Mansion”, both of which were assigned to the coordinates by previous visitors).

After choosing a location label, the user is prompted to send “activity” messages to their friends (it’s basically a tweet tagged with location information). These activity messages are compared by the server, and Plazes notifies you if you’re in the same neighborhood as one of your friends. You can get a feel for the app in the screencast below. 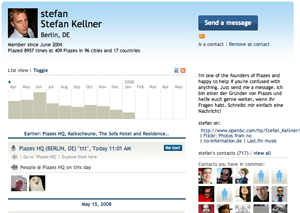 Plazes is also launching a new version of their main site, which will enter private beta next week. Most notable about the launch is the introduction of Twitter integration, which is strange because Plazes seems to mimic Twitter in some ways. For the time being Plazes stands to gain by allowing Twitter users to send geo-tagged tweets, but things may work out differently in the long term. The new version of the site also introduces a Dopplr-esque nearby friend notification system and support for iCal integration. You can request an invite here.

Readers may remember Felix Petersen as the guy who got busted by his own product. Petersen backed out of a speaking gig at a conference, telling them that one of his kids was sick, then proceeded to party at a different event (while Plazes told the world). The whole thing was overblown, but it was amusing nonetheless.