Would you pay someone to add all the correct song titles and cover art to the songs in your iTunes library? TuneUp is an iTunes plugin that aims to make cleaning up your music library as easy as drag-and-drop. The program attempts to automatically tag a user’s music library by analyzing the musical data in each file, even if a song has been previously mislabeled. TuneUp’s digital fingerprinting technology is powered by a partnership with GraceNote, which features a database of over 80 million songs. The program is currently available as an invite-only beta on Windows, with a Mac version on the way.

If you’re looking to try TuneUp out on a Windows machine, you can grab one of 100 invites here.

The interface is simple and intuitive. Upon launching iTunes, a sidebar appears with four tabs labeled “Clean”, “Cover Art”, “Now Playing”, and “Concerts”. TuneUp’s biggest draw are the Clean and Cover Art tabs, which utilize the Gracenote database. To use each, the user simply selects a batch of songs and drags them to the appropriate field. Each song is quickly analyzed, and the program presents a number of possible matches for the user to either apply or discard.

In practice the cleaning functionality works well. Even after stripping all ID3 data embedded in MP3s from a portion of my music library, TuneUp was able to correctly identify songs at least 90% of the time. The system that is used to compare potential data and album art was especially useful, as it allowed me to choose which album each song belonged to (I no longer have Led Zeppelin’s “IV” scattered across four different Greatest Hits albums). 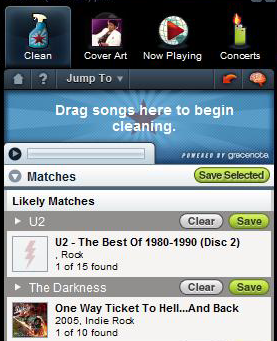 TuneUp is currently planning to offer a subscription plan for its service, though it has yet to work out the details. This presents a problem, as cleaning up a music library is typically a one-time ordeal. It is also a chore, and many people would just as soon put off the chore than pay to be able to do it faster.

In addition to cleanup, as a way to offer long-term value, TuneUp has included a number of recommendation features. “Now Playing” offers a list of album recommendations, YouTube videos, and eBay auctions related to the song that is currently playing. “Concerts” presents a basic calendar that lists any upcoming events in a region.

While consumers may be willing to pay for the program’s cleanup feature, I’m skeptical about its long-term utility. The Concert listing could be handy, but some of the recommendations provided by “Now Playing” are already provided by iTunes through its Music Store. And there are other recommendation plug-ins for iTunes that have more traction, such as iLike. Instead of pursing a subscription model, TuneUp might want to consider a one-time purchase price of around $20 or an affiliate fee model tied to its recommendations.

TuneUp will face competition from services based on the MusicBrainz project, which offers a free alternative to Gracenote’s music-fingerprint database. They also face a threat from Apple – iTunes already uses Gracenote to download album information whenever a CD is inserted into a computer, and they could easily implement song lookup.