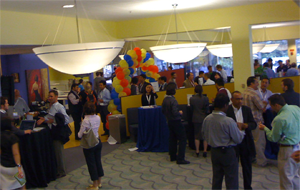 The venue itself was a little strange – a large meeting space/multipurpose room that seemed better suited for a crowd half the size of the expo’s 400 attendees. Seats were in very short supply, though the crowd dwindled as the day progressed.

The expo’s main draw was a 46-company-long elevator pitch marathon that lasted for nearly two hours. Each company was allotted approximately two minutes to impress potential investors, though some didn’t seem to pay much attention to the rule. With very few visual aids (and no breaks) the presentations got a little tedious at times, but there were a few bright stars in the bunch.

The TechCenter is the unconventional brainchild of entrepreneur Saeed Amidi, who has created a “startup ecosystem” where creativity and competition run rampant. The flagship office, located in Sunnyvale, is currently home to 129 companies, and there are a number of smaller locations across the Valley. With a near-constant stream of VCs and monthly Web 2.0 events, it’s easy to see why the TechCenter appeals to so many startups.

Amidi fosters the community by selectively permitting only “exciting” startups to rent in the building. Of course, his motivations are not exactly charitable – he gets a first look at any company that wants to take space, and has invested in around 20% of them.