IAC reported first quarter earnings this morning, and broke out the financials of what the new IAC would like after the pending five-way breakup of the company is completed. (A March court victory against dissenting shareholder Liberty Media clears the way for the spin offs). What’s clear from the financial statements is that the new IAC very much owes its 22 percent jump in revenues and 15 percent jump in operating income to the $3.5 billion, five-year deal it struck with Google last fall to hand over all search advertising on Ask.com and other sites to the search overlord.

In the Media & Advertising division—the new IAC’ largest and most profitable unit which includes Ask.com, Citysearch, and Evite—revenues increased 28 percent to $216 million and operating income skyrocketed 192 percent to $31 million. This was largely due to better revenues per search query due to the Google relationship, and a slashing of marketing costs. (Those annoying and expensive TV commercials finally got canned). Ask has been able to hang on to iits No. 5 spot in search market share (4.7 percent in March, according to comScore) and showed the biggest percentage gain (12 percent) in search queries of any search engine

These numbers show the benefits, at least in the short term, of handing your search advertising over to Google—something Yahoo is learning itself through its limited test with Google to do the same thing. The question is what happens in the long term when market share erodes and Google does not have to pay so much for the privilege of taking away the search advertising business from its fading competitors.

IAC’s other businesses did not do so well on their own. Match.com saw a 10 percent jump in revenues, but a 13 percent decline in operating profits. And the other businesses are just a mish-mash of underperforming assets. 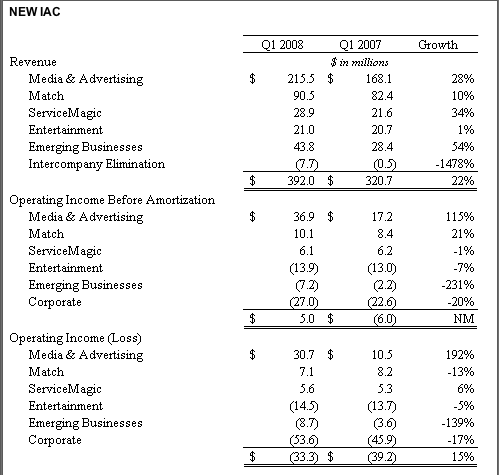