Remember when wireless technology was supposed to help us get out of our offices once in a while? What happened to that? Sure, we might not be constrained to our cubicles all day – instead, we carry them around with us. And let’s be honest… We all know a certain blogger who could stand to lose thirty pounds.

It’s nice to see that sometimes this wireless stuff lives up to the hype.

National Geographic’s TOPO! Explorer gives daring technophiles a chance to create and share their favorite trails using detailed topographic maps provided by USGS. These maps support GPS integration, which makes things easy. Just upload a map to a supported device, head off in the general direction of the trail, and you’re on your way. You can also attach geo-tagged photos to your maps, allowing you to show points of interest (or beauty). And when you’re done you can share you experiences through comments or on the site’s forums. 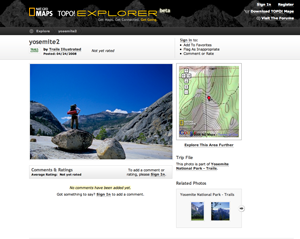 The site has just opened in feature-limited public beta, and hopes to fully launch on May 30th. Unfortunately, GPS integration, which may well be the site’s greatest asset, is not free. Currently National Geographic is charging $25 for the desktop software that enables this feature – a price that, while reasonable, may be the site’s undoing. Hopefully National Geographic will abandon this setup, at least while the site is establishing a user base. Maps are currently pretty sparse, and many people might be turned off by the prospect of paying when there is so little content to be had.

With enough users and some support more from the esteemed National Geographic brand, this site has a decent chance at taking off, or at least getting the hardcore outdoorsy niche audience on board.

Update: National Geographic has informed us that the desktop application is free, and that the $25 applies to map credits. This page is the source of confusion, and is going to be updated shortly.