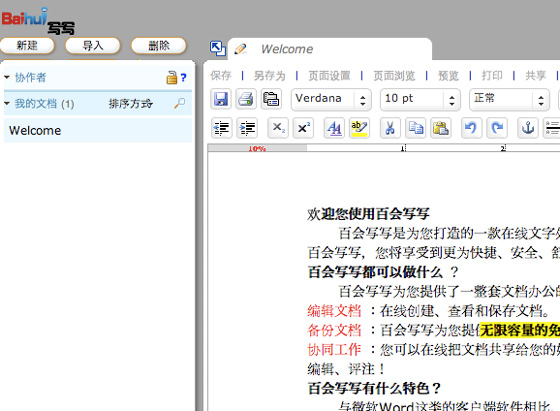 This is an obvious move for Zoho, which has created a suite of online office applications: Chinese versions of their products. The Office piracy rate in China is 90+% according to Microsoft, and that market will be even more willing to use online versions of Word, Excel, Powerpoint, etc. than the U.S. and European markets have been.

The applications are being delivered via a partnership with Baihui, which hosts the Zoho sites. For now, they are launching Writer, Sheet, Show and CRM, with more applications coming soon.

Since the software is being run independently by Baihui, users will not be able to share documents with normal Zoho users. However, Zoho itself supports 11 different languages (English, Japanese, Chinese, Dutch, Danish, Russian, French, German, Italian, Spanish and Swedish), so they also compete directly with this new distribution partner.

The only non-free application being launched in China now is CRM. The price is 99 RMB/user/month, which is about $14. That’s actually more expensive than the $12/user/month that Zoho charges in the U.S.

Zoho says that 50% of their usage today is already outside of the U.S., but their site is very slow inside of China due to the firewall. This partnership gets them onto the other side.