“YouTube sold for $1.6 billion. How much will you sell yours for?”

That’s the over-optimistic hook being used by StartYourTube to entice people into setting up branded video sharing sites on its white label platform.

StartYourTube does exactly what the name implies. You can go onto the site, create your own “tube”, customize it with colors and graphics, mask it to your own domain, invite friends, and start loading content. The tubes not only host videos but have sections for pictures, audio files, and blogs as well. 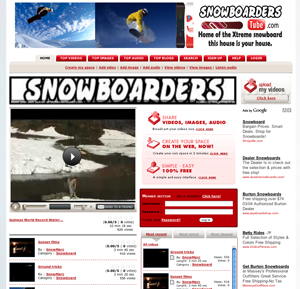 (Update: As has been noticed by commenters, it’ll actually cost you to raise the limits on how much content can be added to your tube and how many views you can receive). Publishers get to keep 60% of ad revenues and the site is even running a $500 promotional giveaway campaign for the “top tubes”.

So far over 11,000 tubes have been created, including ones for snowboarding and anime. It was perhaps inevitable that a straightforward, white label video sharing platform would arise, especially given the success of other consumer social media platforms like Ning.

But it’s not the first company to give users and businesses more power to curate online videos. Magnify was built around the idea of creating specialized channels around videos hosted elsewhere. Reality Digital, KickApps, and VSocial all provide video hosting services that integrate with existing websites. And now with YouTube’s APIs, the online video gorilla itself is giving developers more control over how videos are managed on the web.