Montreal based MediaScrape, a Google News meets video translation service has taken $3.2 million in a new round from we don’t know who, for total funding or over how many rounds we have no idea either.

MediaScrape’s new service is updated every 30 minutes and gives users full control on the way they receive their news, from on demand through to regional loops. The company syndicates content from Reuters, AP, Canadian Press, Dogan News Agency, and others, and translates these clips into English when required. MediaScrape claims to have a distribution deal with YouTube as well.

The site has received fairly extensive positive press coverage in Canada, but there are a couple of oddities that I cant quite work out. There was no details on the investors; it’s not completely unusual that investors don’t want to be named, but usually this would be noted by the company, it wasn’t in this case. MediaScrape claim the $3.2 million is a second round, and yet when they talked to the Montreal Gazette in September 2007 when they took $1 million, they claimed the $1 million was their third round (making todays round the 4th). They claim to be a “leading online broadcast news network” and yet their traffic is so small that they aren’t being tracked by comScore, and even Alexa puts them at over 200,000; their so-called YouTube syndication deal has only netted 714 videos in 7 months, with most videos getting viewer numbers only in the low three figures. Then there’s the web site, with the cheap logo, the stolen BBC world map down the left hand side, cheapy Google logos and just a general look and feel of a site done on the cheap, not by a company with 2-4 rounds of funding who apparently leads the field in news syndication. 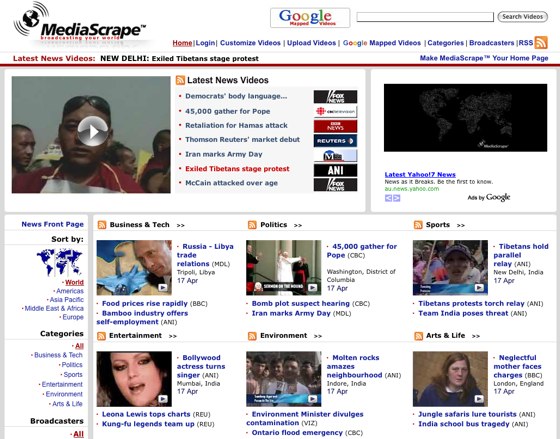