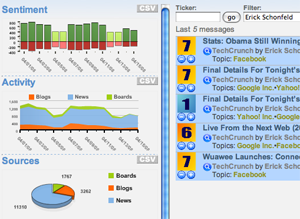 Collective Intellect, a service that can be used to track what people are saying around the net about certain topics, has raised an additional $6.6M in a Series B round led by Grotech Capital Group with participation by Appian Ventures, Croghan Investments, and Crawley Hatfield Capital.

The service is most useful for marketers who need to understand how well their brands are being received by the media and general public. It tracks discussions about particular topics being posted on news sites, blogs, and message boards. For instance, MTV could decide to check out what people think about “The Hills”. Collective Intellect will use graphs and lists of discussion items to show how sentiment has changed over time, and where the bulk of discussions come from. The analytics can be refined by choosing narrower topics, such as actress Audrina Patridge, to see what people are saying about her in particular.

Collective Intellect also provides widgets that can be used to measure community sentiment and find related content on niche sites. Yahoo Finance has deployed one of these widgets for tracking how bullish and bearish their message board dwellers are for certain stocks. O’Reilly ONLamp has one that displays blog posts related to open source software.

The company previously raised $2.6M in February 2006 from Appian Ventures and other investors, so it has raised at least $9.2M so far. Hopefully they can use some of the new money to spruce up their user interface because it’s quite dated.

There are many competitors including Buzz Metrics, Radian6, and Buzz Logic. We covered Scout Labs, another competitor, late last year.