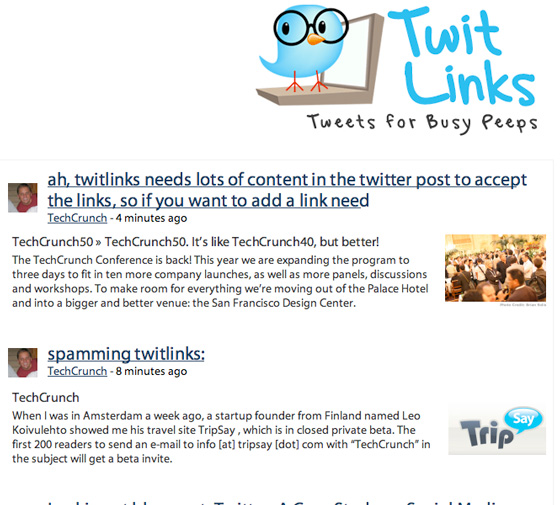 It’s clear that Twitter is the place that a lot of news breaks first (example), hours before blogs and days before mainstream media. No one has created an application yet that harvests that information and presents it as breaking news or breaking memes with anything like what TechMeme has done for blogs and other news sites.

The newest entrant is TwitLinks, which RWW calls the TechMeme of Twitter. It sounds exciting, but the site is nothing more than a list of links provided by top Twitter users. I’m one of the users they track, so I’ve taken the opportunity to spam the site. It was way too easy, as shown in the image above.

A single user’s gesture is not enough information for a service to call it interesting. Other users have to show their agreement by talking about it or linking to it. The aggregate linking patterns presented by AlphaTwitter, for example, is way more interesting than the data presented by TwitLinks.

Other sites are trying to organize Twitter information as well, including Quotably and Tweetmeme. They don’t appear to be the answer, either. Quotably tracks usage on a per user basis. TweetMeme’s rules are more behind the scenes, but the results are less than stellar.

There’s a terrific opportunity here for someone to mine this data and become a valuable destination site. But no one has done it yet. I anxiously await its arrival.