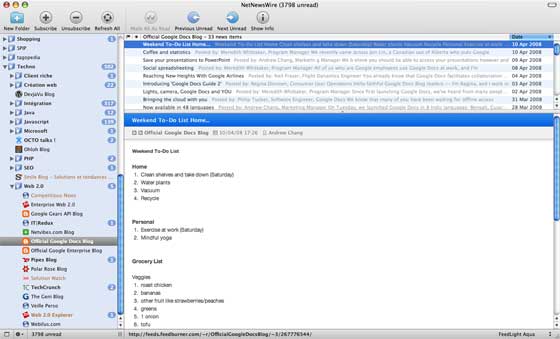 The post, based on the screen shot, appears to be a simple to do list. But the post was removed from the blog and the feed, and that means it’s time for conspiracy theories to blossom.

It is certainly reasonable to assume Google would consider launching a simple to-do list product to complement its office suite, and would post about the new product on the official blog. One reason to remove the post – they may have simply posted too early and pulled it down because the product wasn’t ready to launch.

But the post itself is literally nothing more than a list of things to do over the weekend. No additional features or functionality, or any description of the product, is mentioned in the post.

So maybe Google is doing it, maybe they aren’t. Or maybe Hoizey just had a little fun with photoshop this evening and sent over the results of his work. Can anyone out there confirm that this post was published?

We wrote a post comparing various to do list applications back in 2006, and added to it in 2007. But really, how much can really be done to create an even better way of creating a list, organizing it, and removing finished items? Perhaps this is yet another niche market that Google intends to dominate, and I’m not sure anyone will really care.