It was only a matter of time before someone created an online video-shopping marketplace. Mix together eBay and YouTube and you get Shopflick, a Los Angeles-based startup in private beta that wants to bring the art of video selling to the Web. Sellers can set up shop with their own page highlighting their store and the products they have for sale. Most of the information is presented in video format in Shopflick’s own buyer-friendly player that features a big “Buy Now” button. Shoppers can add comments to each item, share them, bookmark them as a favorite, or embed them elsewhere on the Web. We have 2,000 invites for TechCrunch readers (sign up here—the first 500 will be let in immediately and the rest over the next few weeks).

So far the startup has raised $1 million from angel investors in LA. But Shopflick has a heavy-hitter CEO in David Grant, the founder and former president of Fox TV Studios. Says Grant:

I think it can be an enormous business. Video selling is what television is. TV Commercials. People have tried to replicate video selling on television, which is a mistake.

The front page of Shopflick features a big video player that scrolls through featured items and could also become a prime advertising spot. Just like on TV, Shopflick plans on using its front page to promote items based on limited quantities or time. Shoppers can also browse by category, keyword, or tag. Most of the sellers—there are about 50 of them in the beta right now—are boutique shopkeepers, jewelery makers, or furniture designers from Brooklyn or LA.

Here is an example of a video by Uhuru, a Brooklyn furniture design company that uses sustainable materials:

Shopflick: Buy this product | Get your own Store Player

The site feels a little bit like what Etsy would be if it had video, except its sellers don’t focus on handmade goods. There is definitely an independent vibe. The site is geared towards women. It is heavy on hand creams, lingerie and kid’s clothes. But not the 50-year-old women in middle America who tend to watch the Home Shopping Network or QVC. Shopflick is going more for the hip 18-to-34-year-olds who live in big cities. Founder and president Patrick Yee says:

Shopflick does not hold any inventory. Like eBay, it just matches buyers and sellers, and collects listing and transaction fees. The first six months it will waive listing fees, but it plans to charge $10 to $20 a month, depending on the size of the store. Its transaction fees are a steep 12.5 percent, which is much higher than Amazon’s 7 percent or eBay’s 10 percent, but Amazon and eBay both charge a lot more in monthly fees. eBay charges as much as $300 a month for power sellers. Says Yee:

Ebay’s model is they are trying to take two thirds of the lifetime value up front,” says Yee. “We are flipping that. We lower the barriers to listing because we believe video will convert. We know video sells because it has been happening for 30 years.

On Shopflick, the sellers deal with inventory and shipping, and hope that the viral nature of video will help market their products. Shoppers are encouraged to recommend their favorite products, create collections of their favorite products, and even create their own videos. It is what Yee calls “user-generated merchandising.” To help sellers create the best videos, there is also a marketplace for videographers on Shopflick to help match sellers with video professionals. In this regard, it competes with TurnHere, but it doesn’t mark up the videographers’ fees.

Could this be where e-commerce is headed? Barry Diller, watch out. 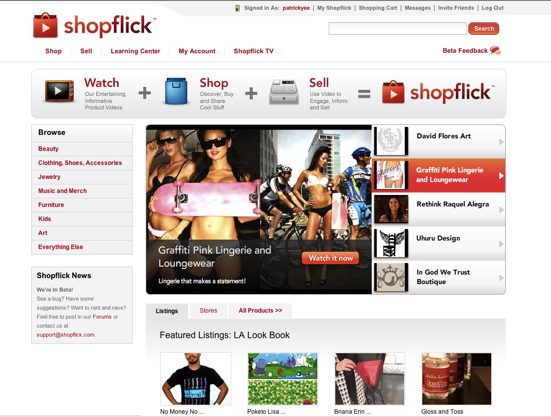