When I started TechCrunch nearly three years ago it was meant to be little more than a hobby. I love startups, and writing about them was fun, not work. But since then this hobby has grown into a real business. We have a number of full and part time employees that need to get paid every two weeks, and advertisers/sponsors that we owe a certain level of professionalism towards. We’ve also acquired a number of other startups (plus this one, just announced). TechCrunch is a serious thing, and needs to be treated seriously by others. We demand some respect around here.

My own personal brand has risen over the years as well to the point where I believe I can say without hubris that I am a very important person. Forbes recently named me No. 2 on their list of web celebrities, for example, and Business Week says I’m one of the 25 most influential people on the web. I’ve also appeared in numerous JibJab videos. More details, if you care to read them, are on our about page. My agent has told me numerous times that I need to be more careful with how I leverage my personal brand, and to be aware of others who are using/abusing it for commercial reasons.

So we’ve been increasingly concerned about developments at Facebook over the last few months that allow advertisers to post ads using my picture and name to endorse their products without my explicit permission. I’ve received literally dozens of emails from readers asking me if I’m associated with Blockbuster’s Movie Clique application, or the new Jackass movie (no to both).

These ads appear in both the sidebar and in my friends’ news feeds. See examples below: 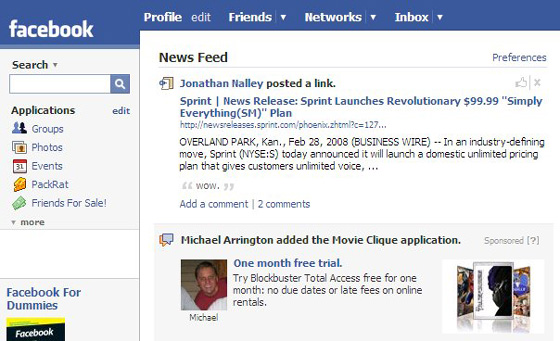 Our attorneys believe that the use of my image and name in third party advertising is a violation of my statutory and common law publicity rights (we’ve written explicitly about this issue before). Specifically, this leads to user confusion as to whether or not I am actually endorsing these products.

The key factor in determining whether a use is permitted or not in California (where I live) is Civil Code Section 3344, which was first enacted in 1971. California is perhaps more aggressive than any other state in protecting publicity rights because of the number of people engaged in the entertainment business. The law allows for recuperation of damages, attorney’s fees and injunctive relief, as well as unspecified punitive damages and statutory damages of $750/incident in the event a person’s “name, voice, signature, photograph, or likeness” is used “in any manner on or in products, merchandise, or goods, or for purposes of advertising or selling, or soliciting purchases of products, merchandise, goods or services, without such person’s prior consent.” There are additional common law remedies available to us as well.

Facebook will argue that users give permission in the terms and conditions. They also allow users to opt out of having their images placed in ads. Our lawyers say that’s a pretty good defense but that they can most likely win over a jury anyway if they focus more on emotional issues rather than the actual facts and legal precedent.

In truth, there hasn’t been much in way of actual damages to back up the lawsuit. But where we’ll really be able to stick it to Facebook is the $750 per incident statutory damages. It’s a stretch, but we’re going to argue that every impression of an ad that includes my name or likeness is an “incident.” Based on our calculations and recent comscore data, we estimate the number of impressions to be in the hundreds of thousands at the very least. Multiplying that number by $750 gets us to damages of at least $150 million.

At this point we’re prepared to settle the case for $25 million in Facebook stock (priced at the employee option price, not that ridiculous $15 billion Microsoft valuation), a small fraction of the amount we’ll almost certainly receive if this case goes to trial, plus guaranteed exclusives on all new Facebook product releases. A recent case involving Taster’s Choice, for example, had an award of $15.6 million in damages.

I am sad that this had to blow up to the point where we are publicly suing Facebook over the matter. We’ll be filing the lawsuit tomorrow along with a related civil case for assault and battery and infliction of emotional distress. In a round of negotiations over the lawsuit with Facebook led by Chief Privacy Officer Chris Kelly, things got out of hand. When our team of lawyers offered to settle for a mere $50 million, Kelly told me Facebook would “bury you and bury your crappy blog” if we filed the suit. He then threw his steaming hot triple soy latte espresso at me, which caused extensive second degree burns over the top half of my body. Later on, he also unfriended me.