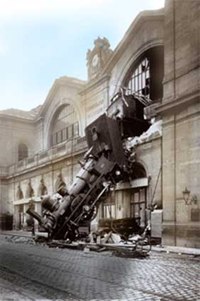 Figures released by the Newspaper Association of America show that the decline of newspapers is more rapid than previously thought, with total print advertising revenue in 2007 plunging 9.4% to $42 billion compared to 2006, the biggest drop in revenue since 1950, the year they started tracking annual revenue.

Online provides some solace for the dead-tree business, with internet ad revenue growing 18.8% to $3.2 billion compared to 2006, but a rate significantly lower than the 31.4% growth the year before, and not even close to replacing the losses from print. Online revenue now represents 7.5% of total newspaper ad revenues.