Last weekend, I went for a drive with my wife up the Hudson River. Well, she was driving. I was playing with the new Dash Express GPS navigation system. The Dash is not perfect, but it holds a lot of promise. (See CrunchGear’s review). It was able to pinpoint a hard-to-find home on a country road. And it let me toggle between a 2-D and 3-D view, bleating out in a computerized female voice when the next turn was coming up. I had to mute that because the voice was driving my wife crazy. In fact, she found the whole screen pretty distracting, so I had to turn it away from her. But my three-year-old son in the back seat couldn’t get enough of it. He kept yelling at me to move my hand whenever I was blocking his view of the blue car on the screen that somehow went exactly wherever we did. Although, he did point out that our real car is green. (Can’t those Dash folks get anything right?)

The Dash is a GPS unit that can communicate back to the Internet using cellular data networks or WiFi (it contains three chips: GPS,WiFi, and GPRS). You can’t browse the Web, but you can use the touch screen to search Yahoo Local for nearby gas stations, restaurants, airports, and any other place that might be listed. One of my favorite features: it can tell you the price of gas at each station nearby so you can price shop without wasting gas driving around. The Dash even found a chocolate shop for us when the one that had been recommended to us was closed. Once you find a place you want to go to, you just hit “route” and it gets you there. It picks what it thinks are the two or three most direct routes. And it even shows you the traffic on those routes based on historical patterns, sensors, and, if available, traffic data from other Dash drivers.

You also can program the Dash from the Web and create GPS mashups. For instance, you can mark your own addresses on a map, find places on Yahoo local, or tap into any GeoRSS feed (or make your own) and send it to the GPS unit in your car. I’d love to be able to access the Web with a browser as well, or at least get regular RSS feeds, but the temptation to check those things while driving might be too great (which is why that is not a feature).

The best thing about the Dash is that it connects you to other Dash drivers to give you traffic intelligence. Because each Dash unit is sending back data about its speed and location, once a critical mass of a few hundred or a thousand drivers get a Dash in the city where you live, you will arguably have the best live traffic information available. At last that is the theory. Early adopters will have to wait for that critical mass to build up before they can test it out.

One request: For people living in big cities with street parking, knowing when a nearby Dash driver just vacated a spot would be a killer feature for future versions of the software.

Okay, I actually have some more requests. An opt-in messaging system with other Dash drivers would be awesome. If handled correctly, could be very helpful and create a strong sense of community among Dash drivers. (No plans for that either, but I think it is a good idea).

Here is where the Dash needs some help. If it picks the correct route, you are fine. But if you know a better one, you cannot tell it which way you want to go. You can only pick a destination and hope that it doesn’t lead you astray. I noticed that it tends to favor major highways, even if they are 20 miles out of your way. All you can do is keep driving, and eventually it will pick a new route based on your GPS coordinates. Something as simple as being able to move the line of the suggested route with your finger, like you can on Google Maps with a cursor, would fix that problem.

Another gripe: you cannot do multi-point routing from the GPS unit itself. You must enter a new destination each time you get into the car. (Although, you can create a map of destinations on the Web and send them to your unit as saved destinations).

A final major flaw with the digital map in the Dash is that as you are driving along a strange highway, it doesn’t show you what cities you are passing. That is how I mentally keep track of where I am when I am driving long distances. On that ride along the Hudson, I found myself repeatedly referring to our old, beat-up, road atlas to get my bearings. The thing that kills me is that the Dash knew exactly what cities we were passing, it just wouldn’t show me.

These are all minor quibbles. I am particularly excited about the the fact that the device’s capabilities will grow over time, especially the ability to see live traffic information and to download customized lists of destinations and geographically-relevant feeds. The Dash goes on sale starting now at Amazon for $399, plus a monthly fee of $10 (the first three months are free). 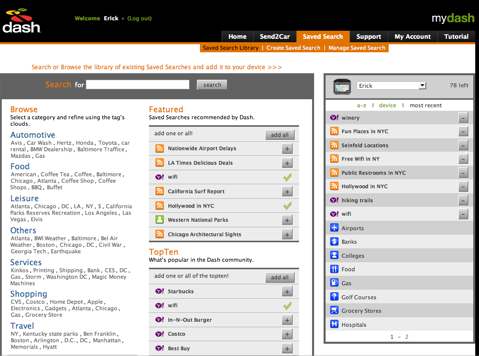