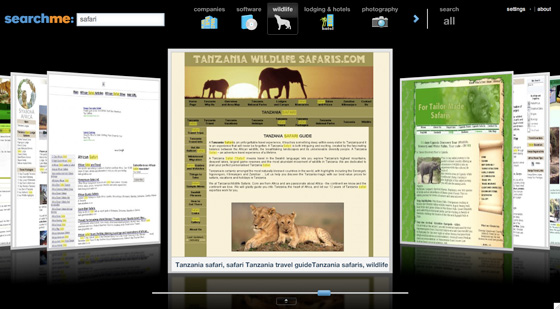 Mountain View based SearchMe has been around since 2005 and has raised $31 million from Sequoia, DAG Ventures and Lehman Brothers. But until last weekend when I met founders Randy Adams and John Holland I knew next to nothing about them. It now joins Mahalo as one of Sequoia’s big bets in search.

I say “next to nothing” because I actually did write about them before. In January 2007 the company launched a test product called WikiSeek that returned results only from Wikipedia and sites linked from Wikipedia. At the time Adams said WikiSeek was just a test product for the technology they developed. Now, over a year later, their ready to put up their main site.

SearchMe goes into private beta today – sign up on the home page for an account. The main difference between SearchMe and other search engines is that it returns results primarily in a visual format, via an image of the result site. The results are displayed in a way that is similar to browsing through albums in iTunes – see the following videos to get an idea of how it looks:

Today SearchMe has indexed just a tiny portion of the web – about 1 billion pages. But they are quickly adding to the index, and say that what they’ve grabbed so far is suitable to show off their technology. In the live demo I saw some results that were great. Other searches returned only so-so results.

SearchMe isn’t all flashy graphics. They are also auto-categorizing every page in the index to help users with disambiguation. A search for “Apple” can be done in the category “technology” to avoid results about fruit. And when you search, SearchMe places the categories it thinks are important at the top. In the screenshot above, the query “safari” shows categories including “companies,” “software,” wildlife,” “photography,” etc. The image to the right shows category suggestions for “blackberry.”

Update: Louis Gray noted SearchMe was indexing his site back in February, and said “Is it taking a graphical snapshot, in the same way that www.archive.org has done to show how Web sites looked over time? I’m not exactly sure.”