2:06: Apple has licensed Activesync for exchange on iPhones, pls comment SB: we license Activesync to lots of companies, it’s in Microsoft’s business interest to license to Apple for exchange

MONKEY BOY!!!!@!!!!!!!!! Ballmer does the monkeyboy demo when someone asks for some love for Web Developers. 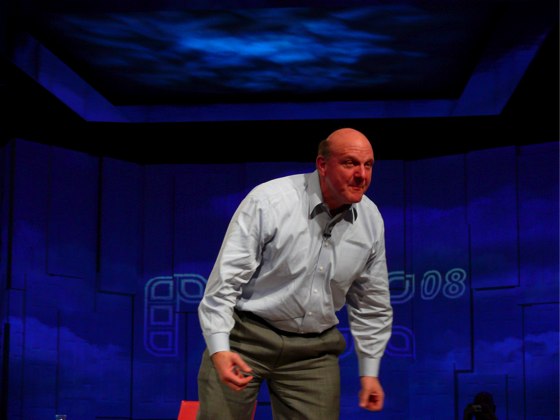 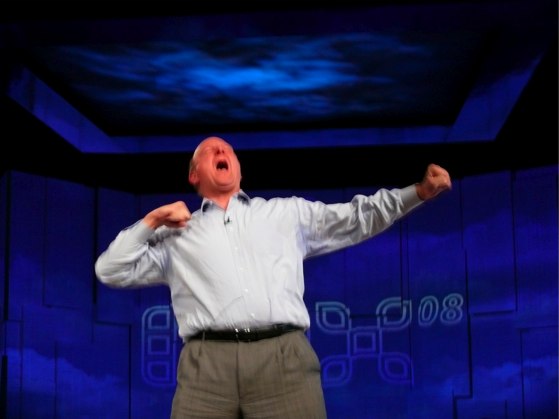 2:00 HD format wars over, Bluray won, what’s Microsoft’s plans SB: we don’t make drives, we believed that HD DVD was a good solution, but moving forward we’re going to support Bluray, in Vista, in ways “that make sense.” Long term: will it be physical or digital delivery 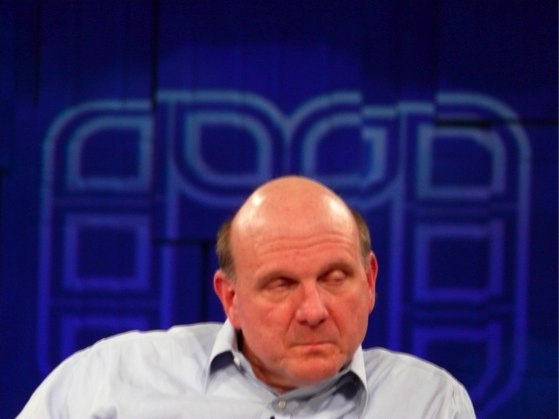 1:57 Silverlight on Microsoft web sites, like AOL has done with mail SB: over time, doesn’t make sense to abandon sites overnight, but over time they will switch

1:56 GK what phone do you use: SB: switch regularly, looking for larger keys as he gets older.

1:54 Reporter from the Seattle Times asks about a sports team. WTF. Ballmer says he wont talk about that today.

1:53: Q about virtualization, not as good as Amazon, need better MS apps for the cloud A: moving forward, we’ll have more to say in the future. 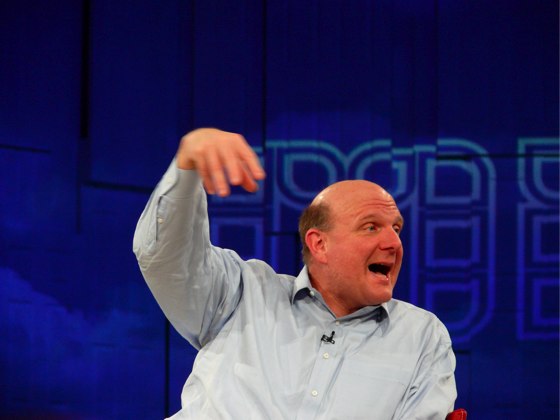 1:49 Q: how to get Yahoo through anti trust, SB: pass Q: synergies SB: about numbers, more search, more advertisers. Google has a larger body of ads, obvious for us to scale for synergies. 1+1=2 1/2 (MS+Yahoo), best of both

1:48: what will happen to php apps post Yahoo SB: obviously we cant have two of everything, they’ll pick the best from both.

1:45 Q: how did IE get left out of the .Net development path SB: it happened, there are things to learn from it etc… 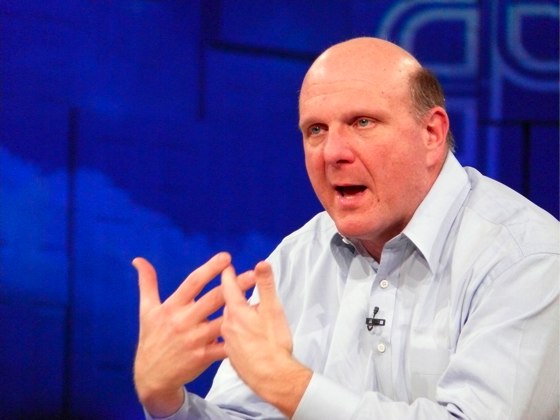 1:41 GK Microsoft is a different company today, arrogance is gone, great to work with, I want to complement Microsoft on that, no bullshitting on that (and yes, he used that word) SB: thanks GW: where as MS was an evil company, now it has nice facilities (why he’s talking about the buildings is beyond me). Starts talking about touching things.

1:38 GK: lets talk about Firefox and IE. SB: we’re heavily investing in the browser. We still have the biggest marketshare. Expect to see a lot of browser innovation from us. GK: how bout IE/ Mac development? SB: that “lower volume” machine…we feel like we should be doing new things other than bringing another browser to the Mac

1:36: GK you dodged the Vista Question SB: been very popular, there has been feedback, issues with compatibility, drivers etc, MS has listened, SP1 shipped etc. 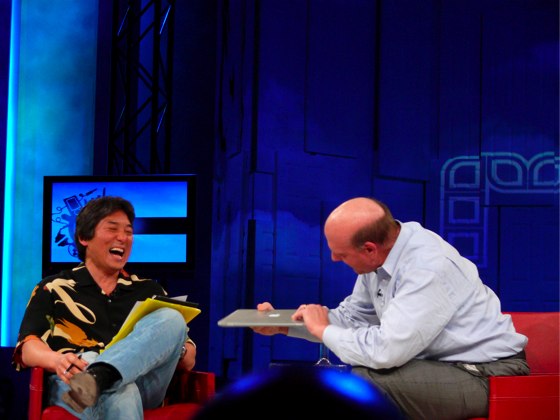 1:34 GK what do you say to Microsoft losing its focus, doing to many things SB: we’ve built two skill sets, enterprise and desktop. Building two new ones, mobile/ devices + online. Most companies only have one core skillset

1:32: GK: what’s the issue with Vista (laughter) SB: it’s the second most pop OS. SB spots GK’s Apple Air, lots of joking, Ballmer says the Air is twice as heavy as his Toshiba and lacking parts.

1:30 GK: tell us more about Silverlight, SB: 1.5m downloads a day, lots of opportunities to fan out and broaden presence

1:26 GK: tells a story about his kids winning a halo tournament. Then goes on to say that his kids think Microsoft is a cool company that makes Xbox + Halo. Not enough people know that Microsoft makes cool stuff. There’s a marketing opportunity. SB: the key is to keep making great products. Kids don’t know about the OS wars, they simply use what’s cool, doesn’t matter who it comes from. 25m Xbox users, 1b Windows users 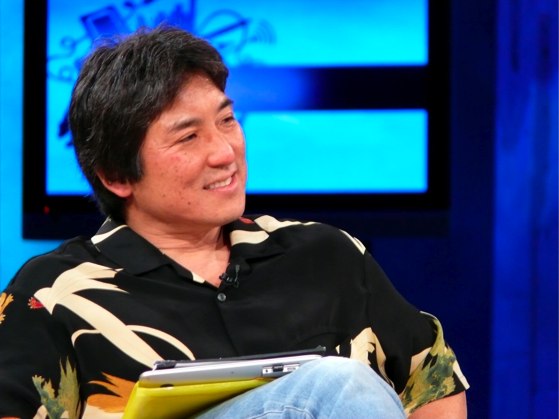 1:24 Gk: what’s the pitch to get new employees given the stock is now high, no startup like growth ahead of it. SB: pitch is still pretty much the same, the stock/ get rich angle has never been big at Microsoft

1:22: GK what’s the story with Bill (Gates): SB: transition in June, goes part time, not sure how that will work until that happens

1:20: GK how many emails do you get SB: not alot, email address is steveb@microsoft.com, jokes that he’ll have a lot more email tomorrow

1:18pm GK: describe your day (more softball questions). SB: days outside of Redmond, excited talking to customers. GK: do you fly Southwest? SB: smiles, no, definitely no GK: why hasn’t Microsoft bought you a G3 SB: that’s another company

1:17: GK: what motivates you? SB: best company in the world, innovating. Enjoys a challenge 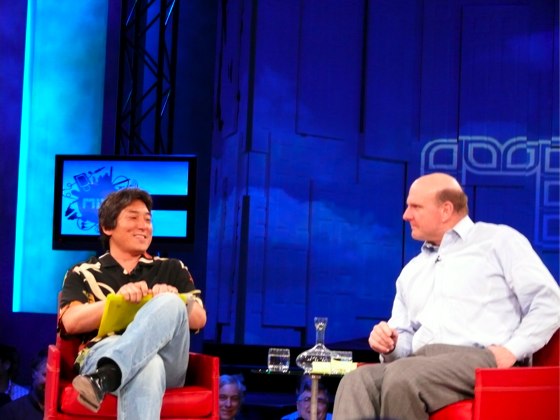 1:14 GK: what’s the deal with the FB deal. SB: it’s all about advertising, partnering sites, big partners are very important

1:13 GK suggests Microsoft should sue Google for anti-trust. laughter. GK then asks whether Microsoft treats apple like a yapping dog that can be kicked out of the way. Ballmer makes a dog yelping sound, then says that Apple is doing a great job.

1:12 SB Microsoft has four core businesses: desktop, no Google, enterprise, no Google SB makes a sound like neh neh neh neh neh. Mobile: Google is an aspirant, but no presence. 4th is online, and its all Google. Ballmer is cracking jokes, he’s certainly animated

1:10 GW asks about “The Big G” SB responds that ultimately search is where it’s at. GK jokes that Ballmer won’t say the Google word. SB responds to laughter

1:09 Yahoo provides the critical mass. GK asks what’s the current status of the deal. Ballmer jokes “we’ve made an offer” lots of laughter. GW says to Ballmer don’t go monkey on me

1:08: Balllmer responds: we want to be big online, advertising is THE next big thing, the only thing. Search is the key to advertising. Microsoft isn’t where they’d like to be now

1:07: some friendly Apple/ Microsoft banter with laughter. Kawasaki says he’s suppose to be a shill and ask soft questions. Then asks “why does Microsoft want to buy Yahoo”

Join us here from 1:00pm PST for a live blog of Steve Ballmer & Guy Kawasaki delivering the second keynote from Microsoft’s Mix conference in Las Vegas.