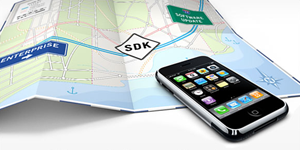 Apple made a number of major announcements today around the iPhone. We live blogged the event if you want to see all of the details. But if you want a summary of the important parts, read on.

Two things happened worth noting. First, the iPhone is no longer just a really fun phone/Internet device. It now supports Microsoft Exchange ActiveSync, meaning it can hold its own against any other business device out there (more on that below). Second, Apple gave more details on its previously announced software development kit that will allow third parties to get their software onto the iPhone. From the demo’s shown today, developers by the thousands will be clamoring to jump on board.

The iPhone still has a tiny 0.14% market share in the mobile world. But even so, Apple CEO Steve Jobs claims that 71% of web browsing on smart phones occurs on iPhones. As someone who’s used many mobile devices over the last couple of years, that’s a believable statistic. Surfing the web on an iPhone, with the high resolution screen and touch interface is a superior experience.

Last summer we compared the iPhone to the BlackBerry 8820 on business features, and it lost hands down. The iPhone still has big limitations that make it less useful for business users, particularly battery life. And many users cannot adapt to the iPhone touch screen, preferring physical buttons. But announcements made today make the iPhone’s core office functionality as good as any other device out there. And the iPhone still has, by far, the superior browsing experience and user interface.

Version 2.0 of the iPhone software now supports Microsoft Exchange ActiveSync. That means much better syncing with the desktop, and not just when the iPhone is physically connected to your computer. If you use Microsoft Exchange, you can now easily set up the iPhone to work with it so you enjoy push email, calendar and contacts.

While users can only configure one Exchange account at a time, setup takes only about 20 seconds (assuming your company already has an Exchange server running). The iPhone applications relevant to Exchange – such as Mail, Contacts, and Calendar – will all retain the same look and feel.

Apple has been working with Nike and Disney to test the new Exchange Server support.

Hi Developers, Come On In 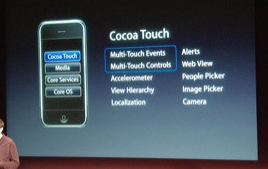 Before today the iPhone was a closed platform that only gave third party applications access via the browser (or though hacks). The company says that over 1,000 iPhone specific websites have been created.

Now Apple is opening up all of its internal APIs and tools for 3rd party software developers. These include a version of the Cocoa programming environment called Cocoa Touch that focuses on the idea of touch as an input. It allows for multi-touch events and controls, use of the built-in accelerometer and camera, and other things like hierarchy views, localization, alerts, web views, people pickers, and image pickers.

There is also now a version of Xcode that can be used to build applications for the iPhone. It can code completely to the APIs in the iPhone SDK, and it can handle both project management and source control management. It has a debugger that can be used remotely on a Mac (plug your iPhone into your desktop and debug from there).

The SDK kit is available immediately. Go here to learn more. You have to join the Apple developer program ($99) to start making iPhone apps. Or iPod touch apps, for that matter, since the SDK applies to that device as well. 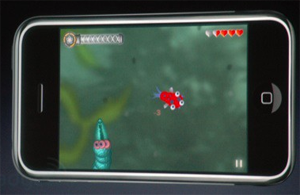 Both Apple and its launching partners demonstrated new applications for the iPhone. Apple demonstrated a program called Touch Effects that let you easily distort photos you have taken and even erase them by just shaking your phone (think Photobooth for your handheld). A game called Touch Fighter was demonstrated to show how the accelerometer could be used as controls.

Apple confirmed the rumor that iTunes would be the only way for users to buy and download iPhone applications. Customers will be able to browse and search for applications, some of which will be provided for free. Developers will get 70% of the sales revenue paid monthly and with no credit card fees. Restrictions, however, have been placed on the type of applications that can be sold: no pornography, nothing illegal, no bandwidth hogs, and nothing that could cause “unforeseen” problems. VoIP will also not be allowed over cellular connections, just WiFi.

Even though application development starts today, users will not be able to download them until June. And companies who want to distribute applications internally will have to wait for Apple to come up with a solution for that.

Jobs’s “one more thing” today was the announcement of a so-called iFund by Kleiner Perkins that will dedicate $100M to companies who want to develop new applications for the iPhone or iPod touch. John Doerr called Jobs the “world’s greatest entrepreneur” and “supreme commander of the rebels” from onstage. See our post about the fund for more details.