Why can’t brothers and sisters just get along? As I noted earlier this month, eBay’s free classifieds site Kijiji is coming on strong since its launch in the U.S. last summer. Of course, eBay owns 25 percent of Craigslist, but since the other 75 percent is not for sale, eBay is putting all of its eggs into Kijiji and taking Craigslist head on.

In January, Kijiji had 2.3 million U.S. visitors, which made it the sixth largest classifieds site in the U.S., according to comScore. In six months, Kijiji has grown to be about ten percent the size of Craigslist (which had 26.7 million unique visitors in the U.S.). Worldwide, the numbers are much closer. Kijiji had 21.6 million visitors in January, compared to Craigslist’s 27.8 million.

Yesterday, Jacob Aqraou stopped by my office. He is the eBay executive who runs Kijiji and eBay’s other classifieds sites around the world (including Marketplaats in the Netherlands, Loquo in Spain, and Gumtree in the UK, Australia, South Africa, and Poland). All told, Kijiji operates sites across 700 cities in 20 countries. But Aqraou was pretty clear about who he wants to kill:

We play to win. We will win in the U.S. Six months in, the U.S. is the best launch we have had and we have not put any money into it. This year we will make significant inroads. And we will be No. 1 in the U.S.

He is not claiming that he will pass Craigslist this year, but he does not strike me as a patient man. Why did eBay launch Kijiji in the first place back in 2005? Says Aqraou:

We did not believe Craigslist was going to be successful internationally with an English-only site. Craigslist has had zero localization. It is all English, run out of San Francisco.

And that is not his only problem with Craigslist. He contends that the bare-bones site has failed to evolve:

They went lean and that allowed them to be early when there was no revenue. The site still looks the same as it did 12 years ago. Users expect more. The bar goes up in terms of user interface, trust, and safety. If you stay still, you get run over.

Now, there is revenue—advertising. And that is bringing the sharks into Craigslist’s once-friendly, non-profit waters. Kijiji is eBay’s fastest growing business. Revenues worldwide grew 104 percent last quarter (from what base, eBay will not say). Expect to see a big marketing push this year on eBay’s part to drive traffic to Kijiji in the U.S. Fees for featuring items, improvements to the site’s navigation, and tools for easier listings are also coming soon.

It doesn’t matter how beautiful a classifieds site is if you cannot find anything there. In terms of the sheer number of listings and things you can find on each site—the single most important factor for success—Kijiji still has a long way to go to catch up with Craigslist. But Aqraou does have a point about Craigslist’s user interface. Searching for stuff is hard. You can’t sort by price. And there are no images in the results pages (only on individual item pages).

Does Craig Newmark have anything to worry about, or is Aqroau just talking smack? 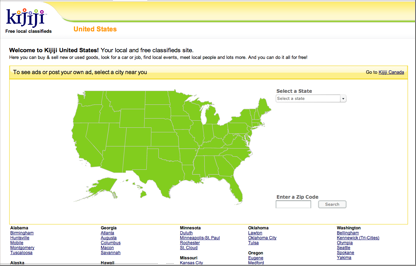 And here is Craigslist: 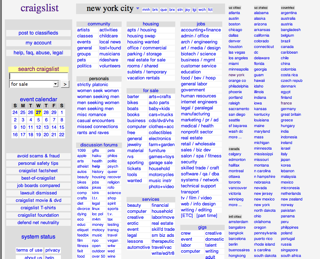