The lasting power of many web services is hard to gauge, especially when those services are at an early stage and require users to adjust some of their most ingrained habits.

Lunarr is a service going into private beta that promises to put an end to the habit of emailing documents back and forth to collaborate. Its creators want to simplify collaboration by placing documents within the web browser and equipping users with wiki-like editing functionality and, more importantly, an email-like messaging system that associates messages with particular documents. 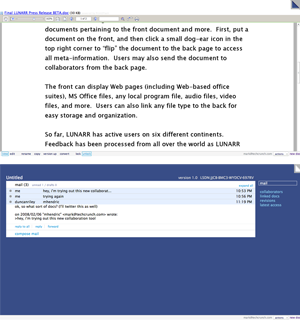 Lunarr works like this: to begin collaborating on a document, you can either upload a file to Lunarr or give it a URL (for online docs hosted at places like Google or Zoho). Or you can start from scratch with a template. Then you can hit the tab located in the upper-right hand corner of the screen to “flip” the page over. On the “other side” exists a messaging tool that lets you send a message to others using their email addresses, whether or not they are Lunarr users. These messages can not only be used to discuss the document in question, but also to bestow access to the document to others.

There are essentially two value propositions to Lunarr: first, the wiki-like functionality and second, the document-associated messaging system. In both the short and long runs, the messaging system provides more competitive value than the wiki functionality. Currently, only documents that are created on Lunarr can be edited via wiki (no luck if you upload a Word document). But even if they extended the wiki capabilities to uploads, there’s no reason to think that they can build a better online office suite than Google or smaller players such as Versionate.

Rather, it seems to me that Lunarr only has a chance of gaining widespread adoption if it plays very nicely with these other online office tool providers and somehow maintains a substantially superior messaging system than those provided by office app providers themselves. The discussion capabilities of Google Docs, for example, is currently quite primitive; you can chat with other people editing a document but there’s no way to send email-like messages to targeted individuals. But would it be that hard for Google to create Lunarr-like messaging capabilities? I suspect not.

Even if this were to happen, Lunarr would have the advantage of being a 3rd-party messaging system that works with all online tools. In such a world, its importance would rely on whether or not Google Docs becomes as dominant on the web as Microsoft Office became on the desktop. So far it has not. Lunarr also has its simplicity and ease of use going for it. We’ll have to see whether it can build up its functionality without losing these core qualities.

The Lunarr team has offered to hand out invites to readers who request them by emailing this address. All accounts will remain free until 2009 and you can invite 50 of your friends (or users waiting at InviteShare). Check Lunarr out and let us know what you think about it in the comments. Is this a prescient tool of the cloud computing era or simply a feature that will be replicated by the online office suite providers themselves?