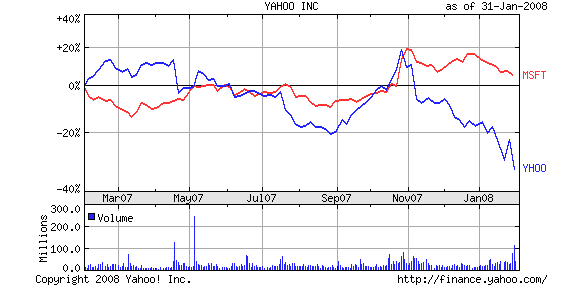 Microsoft’s $31 a share offer for Yahoo is made possible by Yahoo’s slumping shares (Yahoo’s stock was trading at about $31 a year ago). While Yahoo has rejected Microsoft’s entreaties in the past, with Terry Semel stepping down as chairman of the board yesterday, things might be different this time. I ran some quick, back-of-the-envelope numbers to see what a combined Microsoft-Yahoo would look like financially, and how it would compare to Google.

* Microsoft figures are trailing four quarters and headcount is from June.  Search figures from comScore.

The real impact to Microsoft, though, is not visible in these numbers because Yahoo represents a new growth opportunity for Microsoft in advertising revenues and online services. During the last four quarters, Microsoft’s revenues for its online services (MSN, Windows Live, aQuantive, etc.) were $2.8 billion and it lost $949 million. So just combining Yahoo with that business, you get revenues of $9.8 billion, but Microsoft would still be showing a net loss for that business of $289 million.

But this is an advertising play for Microsoft. It wants to combine the scale of its recently acquired advertising networks with that of Yahoo’s, along with Yahoo’s vast consumer reach (which is appealing to advertisers, who see all those eyeballs as valuable inventory).

On the conference call explaining the deal, Microsoft CEO Steve Ballmer general counsel Brad Smith points out with glee that, while other companies may make competing bids for Yahoo, one company that clearly can’t is Google. Citing a 75 percent market share in the paid-search advertising market worldwide, Ballmer asserts, “Google is prevented by antitrust laws from buying Yahoo.” (He should know, he does have some experience with antitrust laws). At the end of the call, CEO Steve Ballmer said that another driver behind the acquisition is to move Microsoft towards a more Web-based software-as-services company:

Yahoo clearly has some strengths in this area, with its continued evolution of Yahoo Mail, acquisition of Zimbra, and other initiatives.

Update:  Here are some numbers from Hitwise on the combined traffic reach of Yahoo and MSN properties.  Together, they have a 15.6 percent market share of Internet traffic in the U.S. , compared to 7.7 percent for Google properties. But Google still has double teh market share in search of both Yahoo and Microsoft combined. 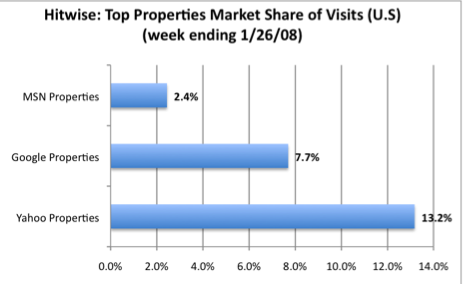 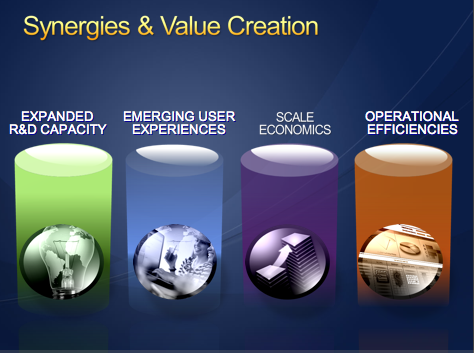