Today, Web-based IM and chat room provider Meebo is releasing full-fledged APIs for its Meebo Rooms that will allow Websites to embed chat functionality in an automated fashion. Currently, Meebo Rooms can be embedded on sites or blogs manually by pasting in the appropriate code, which has already led to a proliferation of such widgets. There are more than 200,000 Meebo Rooms, attracting millions of visitors a month. (See our previous coverage here and here). Explains Meebo CEO Seth Sternberg:

Now, the servers of our partners can say, “I want to create a room.” It automates the creation process on a server-to-server basis. Also, we will be putting advertising into these rooms.

In addition to the APIs, the company is also announcing the Meebo Network, which will serve ads inside Meebo Rooms across the Web, splitting the revenues with the Websites hosting the rooms. Since each Meebo Room is formed around a particular interest, ads can be targeted. And to the extent that sites participating in the network have demographic data on their members, that can be used for ad targeting as well. Only Meebo Rooms created through the API will show ads, not the ones created manually. 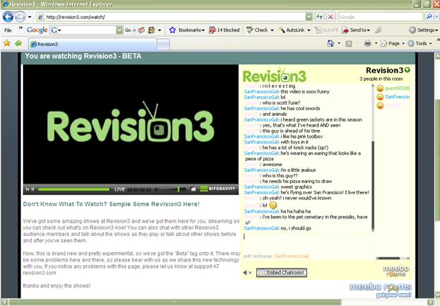 The launch partners joining the Meebo Network are Piczo, Revision3, RockYou, Social Project, and Tagged. Revision3, for instance, will create a Meebo room on its site where fans can watch a synchronized loop of Web TV shows while chatting. Access to the full APIs and the ad network is by invitation only at this point. Social networks could use the new APIs to automatically add chat rooms to every group page. Rock bands or movie sites could add Meebo Rooms to their sites for visiting fans.

Comparisons can be made here to Userplane, a white-label chat service which was bought by AOL in 2006 and powers many of the chat rooms on MySpace. But there are subtle differences. Most notable is the fact that Meebo Rooms can spread anywhere on the Web. Anyone can grab the embed code and put it on their blog or MySpace page as I’ve done below. Notes Sternberg:

A user cannot take a room off of MySpace and throw it somewhere else. We have all our rooms networked. A user can take the CBS Jericho room, and throw it on their WordPress blog. Our chat rooms are networked versus islands within Websites.

It is very hard to get a synchronous conversation going. You won’ get enough people on your MySpace page to have a conversation. But with Meebo Rooms, most of the traffic is coming from somewhere else. It solves the problem of the Web being so distributed.

The power of Meebo Rooms is that they let anyone create live conversations on their site by aggregating people with similar interests from other sites. In fact, it links people between sites. And that, hopes Sternberg, will give it enough scale to become an ad network of sorts. Meebo has raised $12.5 million from Sequoia Capital and Draper Fisher Jurvetson.