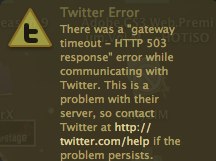 Many Twitter fans have become very much used to following big events via Twitter, its immediate nature and 140 character limit provides key points of what exactly is going on.

From the floor I thought it may have just been my internet connection, but for the brief time Twitter has been up since the keynote (it’s returning errors as I write this) the Twitterosphere is not very happy, particularly those who stayed up late (it was 4am on the East Coast of Australia when it started, and I know plenty of people who were up for it).

Mike Bogle sums it up well in a post he wrote during the keynote:

In that sense Twitter has really begun to play a central role in significant events these days – not just for information consumers, but for deliverers as well. It provides an opportunity for staff working on major events to follow consumer/public opinion as it’s being formulated in the minds of the public. As such it provides some amazing insight.

However as of right now however, Twitter is unresponsive and no – or minimal – tweets are getting through. This has effectively crippled one of the key real-time modes of information dissemination and discussion and left countless users in the lurch.

The fact that Twitter continues to crash during times like this arises from nothing short of poor planning on the part of the company. Load and capacity planning is a fundamental consideration for providers of enterprise level services and the fact Twitter is not doing that is not only cause for a tremendous amount of frustration from end-users, but also concern about the staying power and future of the company.

For those that did miss the event, you can see my live notes from the event here.

Twitter will probably just shrug their shoulders as they usually do during outages, and ultimately we’ll all keep using it, but if there’s one messge I’d like to get through to Twitter: keep messing with Twitter users and eventually users might flock elsewhere; sure there’s no reasonable alternative now (Pownce is on deadpool watch, Jaiku was killed by Google) but this won’t always be the case.