LongJump, an SaaS offering that enables ordinary people to build and customize database-centric applications (for sales, marketing, IT, HR, finance, etc.), has launched a new offering dubbed “Database-as-a-Service (DaaS)” that allows the more technically literate to build applications with databases in the “cloud” (i.e. stored on LongJump’s servers).

The company is comparing its new offering to Amazon’s S3 cloud storage service, because both remove the burden of having to maintain servers locally. In LongJump’s own words, DaaS shines by “cutting the costs and easing the hassles for entrepreneurs and developers who would otherwise have to purchase a database server, provision it, address data access and availability issues, manage backup and replication issues, and tackle security and data protection.” 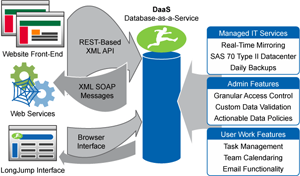 Most of LongJump’s value has hitherto been relevant for the type of people who don’t have the expertise or initiative necessary to develop applications the old fashion way (i.e. actual programming), so it’s interesting to see the company introduce a service intended for precisely the opposite sort of person. The DaaS service can be used either to design applications that use the same data accessed by LongJump applications themselves, or it can be used apart from such applications to deploy wholly disconnected projects.

LongJump, with access to its REST-based API included, costs $24.95 per user per month, or $19.95 per user per month with a 12-month commitment. Competitor SalesForce has a similar type of API but one which is SOAP-based. LongJump’s offering differs from Amazon’s newly released SimpleDB service by functioning as a MySQL-based relational database service, whereas SimpleDB possesses its own architecture. For more information on LongJump’s API, check out the company’s API guide.