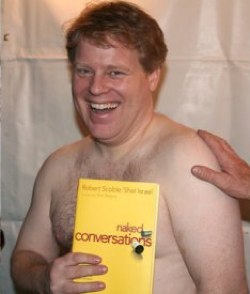 You have to hand it to internet memes, the last 24 hours have been rich with debate, and some of it was even worth while.

It started around this time yesterday when Robert Scoble was banned from Facebook. As Michael noted later in the day, Scoble was testing a new Plaxo feature that exported friend data from Facebook into Plaxo.

Scoble has since had his account reinstated, but not before comparing himself to Gandhi. It’s not a comparison I would have made, and naturally others are having fun with it, but to be fair there is some substance in the comparison, because ultimately supporting open access to data is a positive thing, and passive resistance is an ideal way to go about bringing change.

To finish the day Chris Saad from the DataPortability Work Group has issued an open invitation to Facebook to join with them in working towards open data portability. Representatives from Yahoo, Myspace, Seesmic, Disney, BBC, NineMSN, Dow Jones/Fox and others are already onboard, so they certainly wouldn’t be alone. As social networking further matures in 2008, open access is a cause that may well find favor as people start considering where to contribute online in a saturated and (time wise) finite space.