Analytics have turned shopping sites into finely tuned machines, enabling publishers to efficiently direct the flow of traffic around a site. However, the same can’t be said for their real-world counterparts. Aside from running tests using video tapes and infrared counters, there’s no comprehensive way for businesses to monitor how customers are flowing through their space. That was until Path Intelligence came along. 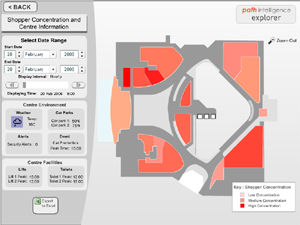 Path Intelligence is a U.K. based company that monitors foot traffic in a rather ingenious way, through customers’ cell phones. Periodically our cell phones ping the nearby cell towers basically saying “Here I am”. Path Intelligence has built receivers that detect these signals and triangulate the owner’s location with accuracy of up to a meter.

Each ping also includes the cell’s unique identifier (think IP address). While these IDs help track the movement of the signal and it’s owner, they don’t reveal the identity of the user. Only your service provider knows that. This is a similar, but more precise method than Google Maps is using to detect your general location on your mobile phone by cell tower.

Path Intelligence can then map these signals and track anonymous customers as they move around and answer questions about the store’s layout through online reports. Where are the bottle necks? Where do customer’s spend the most time. How many customers browse and go? You can see the demo here.

The company is currently only launched in the U.K. Possible future plans include allowing users to tie their phone number to their signal ID so they can get special offers (hopefully not spam) linked to their location or other similar location based services. The company has raised about $1 million so far led by Tim O’Reilly’s AlphaTech Venture Partners.