Yahoo’s popular photo-sharing site Flickr will release on Monday the two new geography-related features we reported on a month ago: Flickr Places and a new world map. 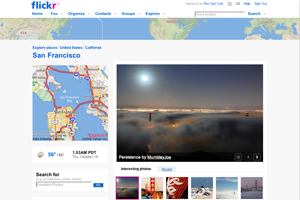 While we have not yet had the opportunity to test these new releases, the Places feature appears to be the most substantial of the two. Flickr has chosen 100,000 locations across the globe (such as cities, states, countries, and regions) and created pages to display photos taken at them. So, for example, if you want to check out photos of Moscow, you can visit a Places page for that city and see a collection of photos from there. These pages will also show other local information such as maps, weather, and current times. 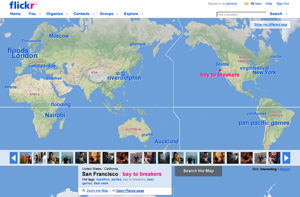 Flickr already has an interactive map for discovering geo-tagged photos taken at various locations around the world. Map improvements will largely be to the user interface; “hot tags” will now appear instead of simple, pink dots and a stream of photos called a “photo ribbon” will appear when you click on one of these hot tags. It appears as though photos will be linked to the map using traditional geo-tragging methods (there are no signs yet that Yahoo has integrated FireEagle with this mapping feature in any way).

These two improvements will be available to all Flickr users and in eight languages.

We recently reported that Flickr had passed the two billion stored photos mark.