Update: Erick is liveblogging the event. 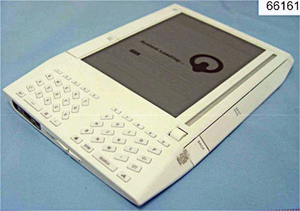 The speculation over Amazon’s new ebook gadget, called the Kindle, ends on Monday afternoon during a special Amazon press conference in New York. Newsweek’s Steven Levy claims to have had the device for weeks and wrote a glowing seven page cover story review of the Kindle this weekend. He finds no fault with the device (every journalist who had the iPhone in their hands prior to launch thought that device was pretty perfect, too).

The Kindle isn’t the most elegant looking gadget ever created (in fact it looks like it came out of the 70’s), but it packs an impressive list of features and could finally bring ebooks mainstream. That’s something Sony couldn’t accomplish with its much more elegant Sony Reader.

The reason Sony failed? Perhaps because their device requires syncing with a computer to download content. That’s the Kindle’s killer feature – cellular and (probably) wireless internet access that will let users download content directly to the device from the Internet. And the cellular connectivity, which generally costs $60 or more per month, will be included with the device for free says a source close to the company.

Kindle users will also be able to browse the web, and Amazon is offering access to some blogs for a monthly subscription fee (some bloggers are wondering why Amazon is charging for this).

The Kindle will cost $100 more than the $300 it takes to get a Sony Reader. It uses the same screen technology – E Ink – as the Sony Reader. that means the display will be viewable in full sunlight and uses very little power.

Amazon isn’t supporting the industry’s open standard around eBooks. Instead they are using their own proprietary format from Mobipocket, a company they acquired in 2005.

More details will emerge tomorrow (and lots and lots of photos) during the press conference. Erick will be live blogging the event.