Bebo is taking on YouTube (and Hulu). Today, it opened up its social network to video partners who want access to its captive audience. Launch partners include CBS, MTV Networks, ESPN, the BBC, Channel Four, BSkyB—Bebo is very popular in the UK—Next New Networks, Crackle, Ustream, Last.fm and JibJab. The partners can keep all advertising dollars from the videos (and from music too). Bebo gets to keep its members on its site.

(Update: In an e-mail, Bebo CEO Michael Birch clarifies how the ad relationship with the media partners works and what he is trying to accomplish:

They control all advertising within the player itself, skins/pre-rolls/post-rolls/ads attached to the player in any way. There could be other advertising on the page controlled by us.

What we’re trying to do here is simplify the whole relationship between media companies and distribution platforms. There’s value for Bebo and our users by having great quality, legal content on Bebo. And there is clear value to the content owner in both controlling the content and advertising, and in keeping the subsequent revenue. We’ve removed the need for protracted negotiations with third parties by opening our doors in such a way that it is a no-brainer for any media content owner, large or small.

Also, in response to how Bebo positions itself versus YouTube or Hulu, he says:

YouTube and Hulu are different to Bebo in that Bebo is a fully featured social network with a viral platform for distributing great content, which may indeed come from YouTube or Hulu. YouTube and Hulu have community type features but are not at the core a social network. The social network is where people are checking in daily, communicating with friends, and in the process sharing and discovering new content. For example, most new TV programs I watch are due to friend recommendations. Bebo simplifies and automates that discovery process.) 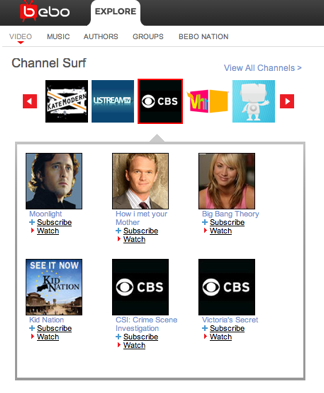 Members will be able to create and share their own video and music playlists. And media companies will get their own profile pages. (Note that this announcement is separate from Bebo’s participation in Google’s OpenSocial platform).

There is no doubt that media needs to go wherever the audience happens to be hanging out, and if it is not going to cost the media companies anything, why not sign up with Bebo? As for Bebo, maybe the free vids will help keep its growth from slowing down. Or it may not. The video push was not enough to keep at least one key Bebo executive, who left the company this past weekend.

If you look at Bebo’s traffic, as of September (the last month for which worldwide figures are available), comScore showed it leveling off at about 20 million visitors a month. (Bebo claims 40 million members). Here is the Compete chart for U.S. traffic, which also shows a dip.