One thing that has become a certainly in our little tech world – a few months can’t go by without rumors surfacing that a sale of Digg is imminent. CEO Jay Adelson and cofounder Kevin Rose are in a perpetual rumor cycle. The problem is, they seem to be the ones at fault for the rumors. The reason? They’ve been trying to sell Digg for nearly two years, on a nearly constant basis. And the guys they’re pitching keep leaking it all to the press.

In the past, Adelson has always said they have never tried to sell Digg. He says they will meet with companies when approached, but they are never the party trying to make the sale. The problem is that too many independent sources have told us that Digg has tried, hard and persistently, to sell to them. The company has been on the market for nearly two years. There is just no way to deny it.

Frankly, I don’t understand why they are so anxious to sell it. They’ve turned the corner on usage – most of the submissions and traffic today are based on non-tech stories. There is a real argument that Digg can be a mainstream news sorting service. Comscore shows them at 11.5 million monthly uniques, with a nice growth curve (see below). 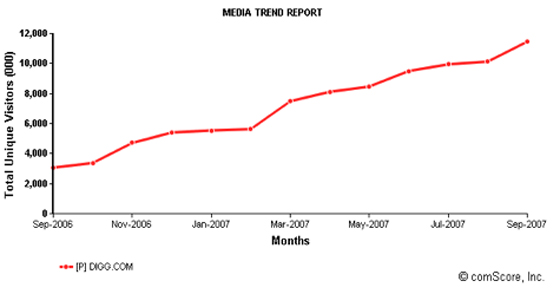 There is no good reason to sell Digg when it continues to grow like a weed. But that doesn’t seem to deter Adelson and Rose from trying to dump this thing at every opportunity. They’re always asking for more than people want to pay, however, and they haven’t been able to create a bidding war to jack the price up.

Perhaps the most recent rumors are true. If they are, I congratulate the Digg team and investors. But if the rumors are as true as the previous ones (meaning not at all), then I suggest they hire an investment banker to put together a proper pitch deck, approach the key buyers, and get a real bidding war going. That’s the way to sell a company for an absurd valuation. The slow burn approach does nothing but create a never ending cycle of rumors.