There has been endless speculation around the new advertising network that Facebook will be launching next Tuesday at ad:tech in New York.

There are at least two pieces to the network. One is getting more data in about what users do when they aren’t at Facebook, allowing for far more targeted advertising. The second is running those ads, perhaps even off the Facebook network itself. And then there is the Microsoft angle – since they have some rights to serve advertising on Facebook, it’s unclear how they fit into it all.

Many of the details are still vague, but a leaked Facebook document makes at least one part of the network clear. Facebook is going to be gunning hard to get lots and lots of third party data about its users into its database.

Beacon is the internal project name at Facebook around an effort to work with third parties and gain access to very specific user data. An example may be a purchase of a book or DVD from Amazon. Under Beacon, the fact of that purchase will be sent to Facebook and automatically included in the user’s News Feed.

At the point of sale on the third party site, the user will see a “toast” popup asking them if they approve the sale information being included in their Facebook News Feed:

The feed information includes the user name, what they did (bought something), what they bought, and where.

Users have a number of privacy options – opt in to always including this data in their news feed, opt out to never include it, or opt in to include it with a secondary confirmation via the toast above. Users can also opt in/out for specific third parties: 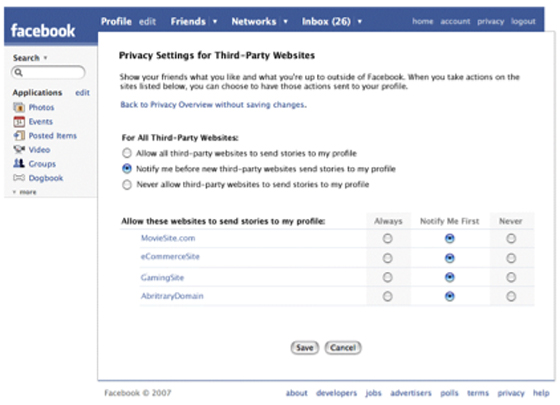 From what we hear, third parties supply this data to Facebook without compensation; what they get in return is a link back in the News Feed (which is effectively a free ad). Facebook, of course, gets incredibly valuable data about the user. This data can be used to serve targeted (highly, highly targeted) ads back to them in various other places on Facebook and elsewhere.