When Google went public in August 2004, many were impressed that the stock opened at a premium to the price paid in what was then (and in some respects still is) the unheard of direct auction IPO. Some may have dreamed of greatness for Google stock, but if you’d suggested then that Google would pass through $700 a share (it closed at $108.31 on its first day) you would have been derided as a lunatic. On October 31, Google stock passed through $700 a share, becoming the 5th largest listed company in the United States. 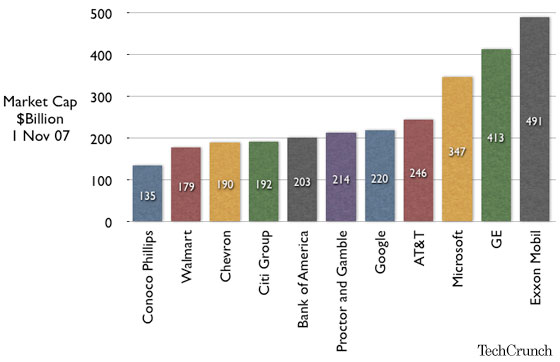 A search engine that started under the name of “BackRub” by two Stanford students in 1996 is now on paper worth more than corporate giants including the global banking conglomerate the Citi Group, Proctor and Gamble and Walmart. Google is worth more than the big three US car makers put together, and then some. We may obsess at times over Google, and there is never any shortage of debate in relation to Google’s many activities, but no matter what your views, this is a remarkable achievement.

Google’s growth to date knows no bounds. The company continues to push into new markets, or even creates new markets where none have existed before hand. From mobile phones, to television and radio advertising, software and online software substitutes, the list goes on. This week they’ve even managed to revolutionize the entire social networking market, and all in the space of a couple of days.

As Google’s march forward continues, could Google ultimately become America’s biggest company? The stock growth rates in the following chart would suggest that the answer is yes:

To become the biggest listed company in America Google doesn’t need to reach the (much derided) figure Henry Blodget made of $2000 a share, to beat Exxon Mobil at todays market price, Google stock needs to hit $1572.50 a share.

That figure may sound insane, but we can look at previous stock milestones to chart how long it may take to get to that figure. Google stock grew from $200 to $700 a share in 30 months. It needs an increase of just short of $900 a share so based on the 30 months it will take 54 months (or 4.5 years) for Google to pass Exxon Mobil based on XOM’s current cap. However if we look at Google’s short term growth we see that GOOG stock hit $500 for the first time on June 1st this year. The $200 leap took 5 months. Presuming a similar growth rate Google will become America’s largest company by approximately October 2009.

Growth rates are rarely static so calculating possible time frames is guesswork at best. Exxon Mobil has seen healthy stock increases over the last 5 years so it is likely that its market cap will increase. And yet Google’s growth rate continues to accelerate as well; it took 23 days for Google’s stock to increase from $600 to $700 a share. Analysts are already talking about $800+

Some will deride the notion that Google may become America’s largest company by the end of this decade, and I don’t completely blame them, however the evidence would suggest that Google is heading in that direction. Google is already arguably the most powerful company in the history of the world, controlling so much of our daily lives; it’s not unreasonable to think that it may become the richest company one day as well.