The site, “Eco Treadsetters” comes from the Yokohama Tire Corporation and is focused on reinforcing Yokohama’s online branding, increasing its user base and enhancing the company’s position as “a socially-aware tire manufacturer that is focused on protecting the Earth.”

Users can create profiles, communicate with each other, form sub-communities, have a profile page etc…the pretty much standard social network feature set. Users are also able to “submit their environmental projects, created to help preserve their respective communities, to potentially win prizes, including an eco-trip to Costa Rica and gift certificates from Patagonia and iTunes.”

Pringo has been off our radar for a while as more well known white label services such as Ning get most of the attention. The company has built up a respectable corporate business providing social networking solutions to sites such as 11on11.com, CBS Radio and ePharma.

It’s no slight to Pringo when I say that I just don’t see the appeal of a social network from a tire manufacturer; after all there is nothing wrong with how the site functions and no doubt they were paid well to host it. The long tail may be long, but I think in this case Yokohama wont gain decent road traction. 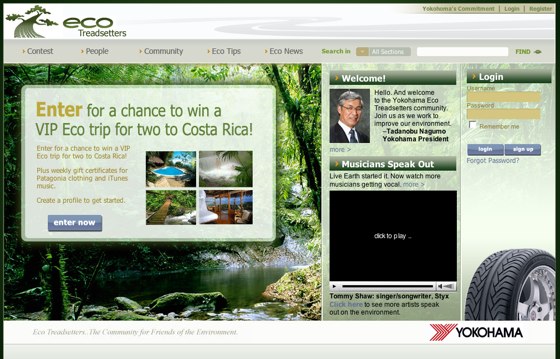