How much is $15 billion? It’s hard to understand how much money that really is. But this evening a friend helped put it into perspective in a conversation about the deal: among the pure-play U.S. Internet companies, only Google, eBay, Yahoo and Amazon have larger market capitalizations. Their annual revenues range from $6 – $11 billion/year. IAC, Salesforce, Monster.com and all the rest trail significantly. 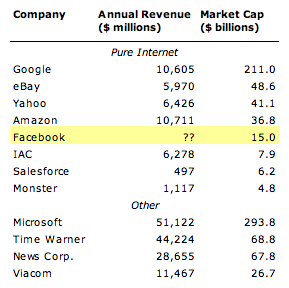 Big Internet properties like MSN/Live.com, AOL and MySpace can’t be directly compared because they are part of larger corporations. Still, its easy to imagine that Facebook, at $15 billion, is perhaps worth more than AOL and MSN/Live.com. Is it worth more than MySpace, which was acquired for a mere $580 million in 2005? The total value of parent company News Corp., with $30 billion or so in annual revenue, is just $70 billion.

Of course, Facebook is not being valued by the public markets like the others. And it may be some time before there is any updated valuation for the company. They are now positioned with a huge war chest of cash (the actual amount raised is likely above $240 million; rumors of a hedge fund or other financial partner who put in additional cash are already swirling) and a massive stock valuation. They can make acquisitions of key technology and talent without spending much. And they can go for years as a private company on that cash. Even with the 700 employees the company expects to have next year, they shouldn’t spend more than $50 million or so per year to run the company.