This Monday, MTV quietly deployed a Hot or Not competitor called NextorNot.

The premise, as with Hot or Not, is simple: users flip through “profiles” of other users (consisting mainly of a portraits) and indicate whether they think the people in the profiles are attractive or not. In NextorNot’s case, you hit the “I Like” button to indicate you find the user attractive or the “Next” button to see the next profile (thus, the “not” in NextorNot is actually a good thing).

Depending on viewers’ behavior, users with profiles rack up points based on how much time people spend on their profiles. The more you sit and look at a profile, the more seconds the user gets added to their total. If you hit the “I Like” button, the user automatically gets tallied five extra minutes. 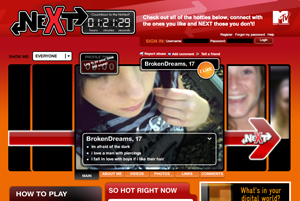 MTV’s twist to this tried-and-true formula is to feature the “hottest” guys and girls from each day on their three dating shows: NEXT, Parental Control and Exposed. If you prefer not to watch TV, you can check out the highest rated users from each day on the site itself. Your own stats (how many people have “liked” or “nexted” you, etc.) are also available on the site.

Recently we wondered whether Hot or Not should ditch its website and turn into a Facebook application. The company recently abandoned its attempt to sustain a business model based on completely free dating services.