We all have bad days (or weeks/months) but many of us may be wary of venting our frustrations online using Facebook, especially since our parents and bosses can now see our status updates and wall posts.

A well-executed Facebook parody site called Hatebook has stepped in to provide (temporary) misanthropes with a place to air grievances about everything they hate.

Hatebook looks and functions much like Facebook, except with an evil twist for everything. The color scheme is hellish red, profiles include a section called “Why I’m Better Than You!”, and members can create “Hate Albums” that consist of photos and descriptions of things they hate. 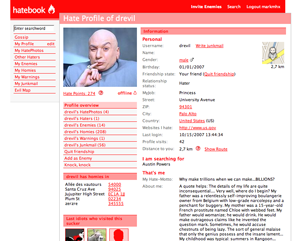 The German creators of this jaundiced social network have done a surprisingly good job replicating much of Facebook’s functionality, and they have even thrown in some useful features not found as a default on that more popular website. Google Maps are integrated into Hatebook so you can visually locate other members by looking for their avatars on a map. You can also see which members have last visited particular profiles.

But don’t play around with Hatebook too much if you are concerned about privacy, because all messages (“junkmail”) are viewable by all other users, and there are no privacy controls.

This is not the first attempt to parody or lash back at more mainstream (and self-serious) social networking websites and the general trend towards constant online interconnectedness. Way back in Spring 2006 we reported on a couple of anti-social web services, and this past August we wrote about a website that encourages users to unplug themselves from everything, including each other. With the development of the Facebook platform, we are even seeing these efforts made within Facebook itself, with the Enemybook app. Why hate outside of Facebook, when you can hate within it?