Changing around the style of your profile is a big part of MySpace’s culture. Heavy users change their profiles daily, leading to over half a million threads in MySpace’s forums from users asking how they can customize their profiles. Yet after four years of operation, profile design still consists of CSS hacked together through third party sites or an allegedly ripped-off (Real Editor) editor that only works in IE.

Online website designer Weebly has done better and provided a lot of the functionality MySpace should already have. They’ve spent the last several months not only creating their own MySpace profile editor but also an integrated widget platform to boot. It’s all hosted under a new site called SnapLayout. 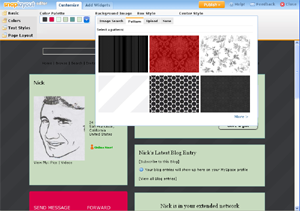 The SnapLayout editor is pretty straight forward. You log in with your MySpace credentials, and can use a WYSIWYG editor to make drag-and-drop changes to all the major features of your profile. You can select a pre-made template or start customizing changes on your own. The editor lets you move around boxes, use Flickr photos for a backdrop, adjust text size and style, or even change the entire color pallet of your profile (i.e. summer and winter themes). It can also add a slide show of all your uploaded photos to the header of your profile. I’ll defer the details to Justine Ezarik and surprise guest MC Hammer in their demo video below.

The more significant piece, however, is the widget platform that lets users select and add widgets to their profile. All you need to do is click on one of the widgets and drag it to where you want it on your profile. Their first example is a free gift widget that lets you and your friends give virtual gifts to each other. When you give a gift to a friend, you just need to log in to MySpace to verify your true identity. There’s a viral aspect to the widget because users that want to show their gifts will have to have a SnapLayout profile as well. They will be adding a select number of widgets in the coming weeks and eventually opening the system.

The danger is, of course, is that MySpace releases their own system in the coming months. But their snail’s pace of innovation doesn’t make that likely. Lets just hope that MySpace doesn’t find the service in violation of their terms of service and shuts down yet another third party application that adds functionality to the site.