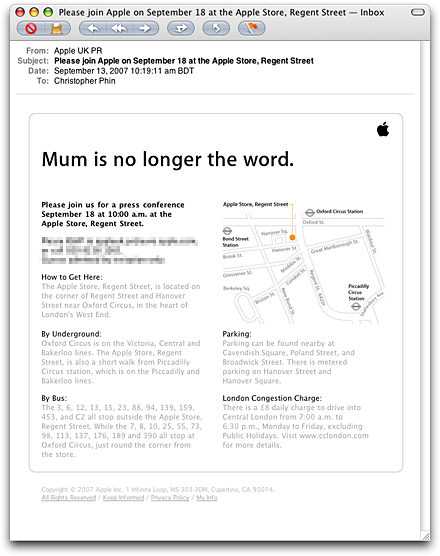 An 8-gigabyte iPhone will be launched in the UK (according to CrunchGear) on November 9 for 269 quid or USD $542, a considerable price increase as it leaps over the pond. O2 will be providing service and free WiFi will be available from The Cloud, a UK pay-as-you-go public WiFi provider. The WiFi music store will also appear on UK iPhones next month, allowing for on-the-go downloads from the ITMS.

O2 has been building out its EDGE network to support this launch, which is actually a downgrade of its current European 3G offerings. The move to give away free WiFi is probably an attempt to offset the poor 2.5G data coverage in Europe in general. Jobs said that 3G was not embedded into the phone due to battery concerns, which means the next iPhone will probably come attached to a car battery and it’s own handtruck. This is right in line with TC France’s discovery of the FrancoiPhone on Orange.

In honor of our friends over the pond, CrunchGear is offering one free 8GB iPhone — already unlocked by our own team here in New York. Click through to CrunchGear to read how to enter.