Session one as follows, including our live notes.

Powerset is a natural language search engine that can use everyday phrases and grammer to conduct more accruate web searches by understanding the search query and the pages it indexes. Parsing phrases and grammer theoretically produces better results because the egine has a better understanding of the searches intended goal than with just keywords alone. For instance, a Powerset search for “politicians who died in office” returns information on the subset of politicians who died in office, rather than a group of pages that ranked highly with the phrase. 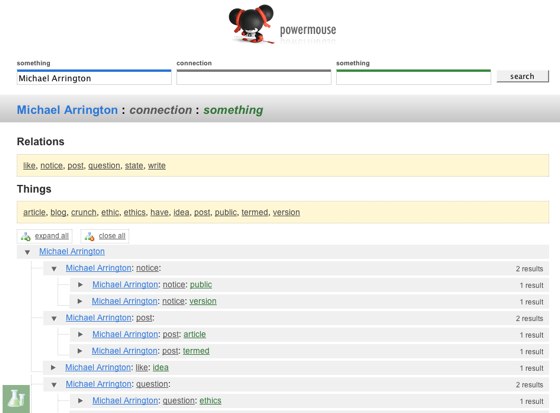 Demonstration of natural language queries with a social voting style feature. Touches of other sites

Demonstration of Powermouse (see screen shot), information is pulled from Wikipedia into a semantic index.

TC40 attendees will be amongst first in private beta. 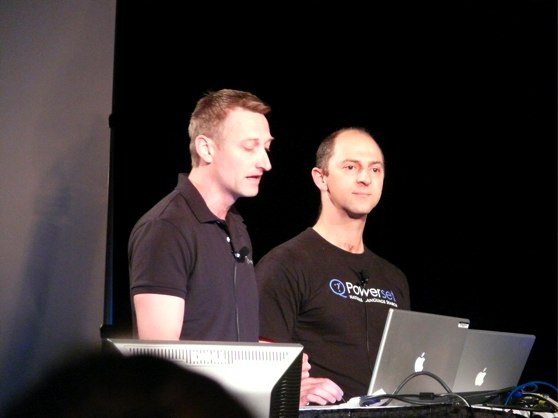 Cognitive Code makes artificially intelligent user interfaces. Their main product is the SILVIA (Symbolically Isolated, Linguistically Variable, Intelligence Algorithms) platform, which can add a human-like artificially intelligent interface to nearly any digital device. The SILVIA platform can learn and converse in natural language to carry out tasks for the user. Potential applications include children’s digital toys and personal assistants.

Demonstration with AI on the screen, the AI system is having a conversation with one of the Cognitive Code. A couple of bugs in the live demo, but pretty cool.

Clever idea, if they can pull it off we’re seeing the future of toys.

CastTV is trying to build one of the web’s best video search engines by creating a rich index of contextual data about videos and an easy to use interface for searching them. The engine pieces together context for a video based on it’s metadata, the content surrounding it, and the content of pages linking to the video. Notably, CastTV also searches paid video searches such as Apple iTunes. Their user interface allows users to sort results by shows (to weed out non-relevant stuff), host (such as itunes, CBS Innertube, etc to focus on a favorite service provider), by date, relevance, prices, etc.

Colts Titans next example. CastTV is using smart clustering for results, pulling video from MSM and user generated content. Nice results, even if I have no interest in American Football :-) 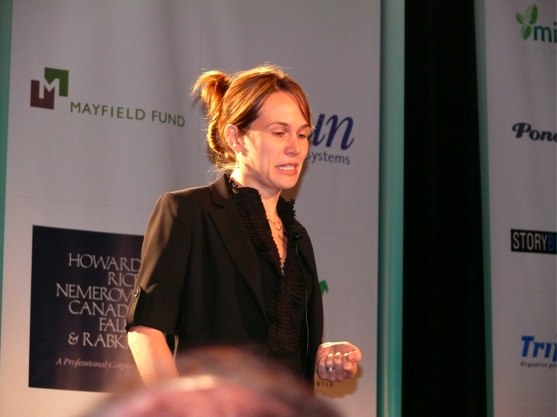 FAROO is a peer-to-peer web search engine that has no centralized index and crawler. Each web page visited by users is automatically included into the distributed index. Ranking of search results is based on a distributed usage statistics of the web pages visited by FAROO users, which leads to a more democratic, user centric ranking. FAROO also shares advertising revenues up to fifty percent with its users. The search engine uses privacy-protected behavioral targeting to increase conversion rates.

Interesting concept, P2P in a strict sense. Results are only pages that have been visited by users…I cant’ help but think the SEO crowd is going to love this :-)

The presenter claims that the algorithms actually prevent manipulation: he doesn’t know the people I know. Nice results though. 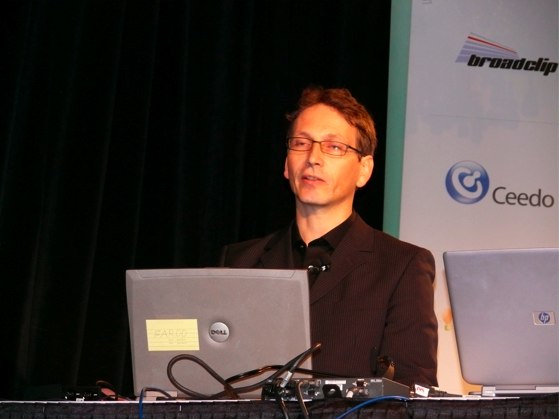 Viewdle is a white-label platform for indexing, searching and monetizing video. The technology they are developing lets video producers algorithmically extract metadata from news, shows, movies, and Internet video. This is much more effective than the old method of text-based metadata indexing. Viewdle’s most notable feature is their facial-recognition technology that can create a create a “real-time index of true on-screen appearances”. They plan on building one of the largest databases of people-in-video references. Reuters is currently testing out Viewdle’s technology with their videos news inventory by letting people search their catalog for specific people.

Demo starts with 2 minute demo video. Slick, we’ll see if we can get a copy.

The facial recognition is always an interesting concept, but I’m remind of Riya. More Britney Spears examples, although they are pulling data from others in the video as well, it looks a step from previous tech, particularly give it’s video they are scanning, not just pics. 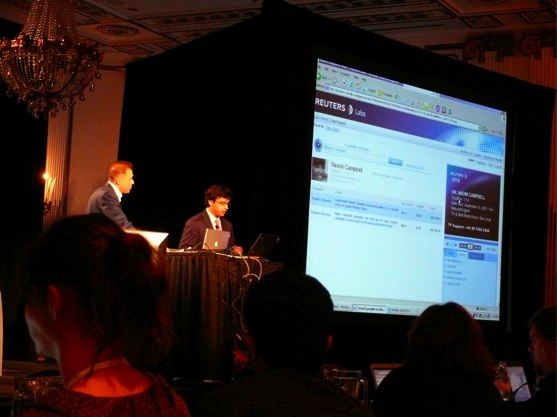 Chris Anderson: what are the advantages of the various products to the user

Faroo responds first: we are by the user, for the user, it’s good because “they are doing the search together”

Om Malik to Faroo: most P2P systems people turn off, how do you overcome that, also how do you seed the network?

Faroo: it’s not a problem…not a particularly good response. 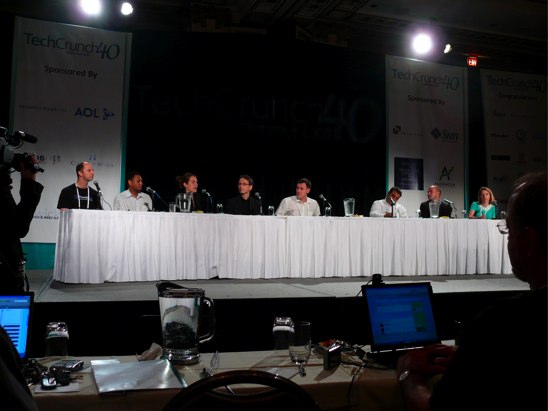 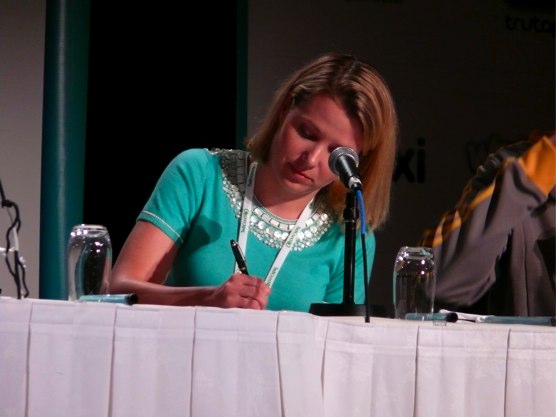 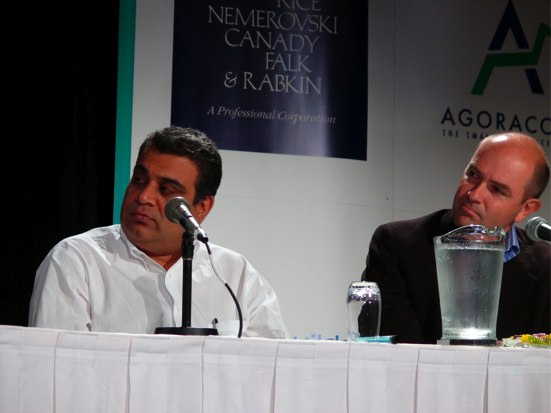 Jason asks Om: which one is the most viable. Om: CastTV. One to last: Cognitive Code. Middle of the road pick: Powerset. Faroo is “interesting,” Viewdle will be “acquired soon”

Jason Calacanis to Marissa Mayer: will people switch away from Google. Reply: most people use more than one search engine according to stats. Google’s advantage is being a one stop shop. JC: what did you think of CastTV, MM: nice interface, clustering for duplicate issues is good tech. 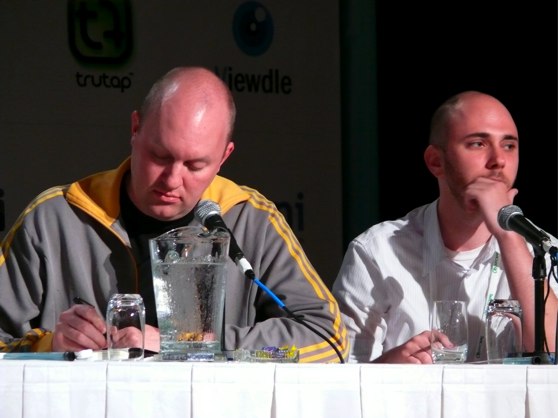 Marc Andreessen: I don’t want to be obsessed with distribution…but I am, how do companies deal with it
Powerset: we’re very aware of this…uploading to users (???), embeding on external sites (Google custom search style I’d think).

Conclusion: speaking to Nick and we agree that CastTV was the winner in a very competitive group, good tech which just works with a practical use. Cognitive Code had the coolest product, but the demo wasn’t great which lost it for them.