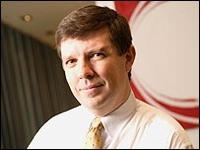 In a wide ranging keynote address at the 2007 Influence Forum, ICANN CEO Paul Twomey told the audience that virtual worlds are the future of global commerce.

Twomey used The Sims Online as an example of the sort of interface all companies in the future will be using, in fields including retail, client services, B2B and advertising. Twomey cited the interface behind Google Earth as another example of a “game-like interface” that has been put to real world use. Twomey said that geolocation services would also play an important role in the virtual internet, suggesting that the way we will interact within next generation virtual internet services would have a strong geographical focus.

It’s interesting that the head of the body that controls the internet believes that the world of tomorrow is virtual; Twomey didn’t suggest that it may happen, he stated that it would be as a fact. Virtual worlds such as Second Life may not be the exact model used in the future, but there is little doubt that if Twomey is correct they are certainly heading in the right direction.